Sound clash is when sound systems plays music against each other to see who have the hottest (Baddest Tunes) otherwise call Dub Plates. 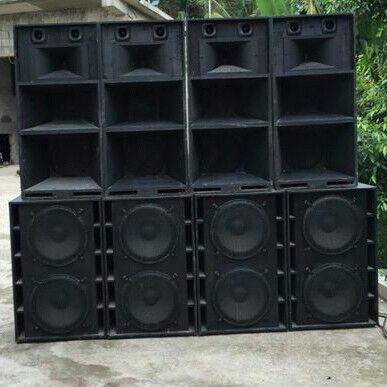 There are different rounds during the clash, firstly the juggling and the last round which is called the tune for tune or(Dub for Dub) the sound which plays the hottest tunes will be presented as the winner.

This event, held annually is called "Death before Dishonor" and it Will be held on Easter Monday April 5th, 2010.

The tag line is "The Final War" as per the promoters Irish and Chin this is the final in the series of world clashes which started in 2001.

Sound systems vying for the trophy are: Might Crown the far east ruler, Black Kat with Panther who have won the trophy a number of times, Tony Matterhorn who is now a Dancehall artiste and have also previously won this trophy.

Bass Odyssey the sound from St. Ann Jamaica who said they are going to win the clash for there former team member Squingy who pass away on November 24, 2009 in Tampa Florida.

Then we have the two up-coming champions Sentinel and Bredda Hype who are going to try and over throw the former champions.

Bredda Hype was added to the line-up after his good showing in the recently held Guinness sound of greatness which was won by Bass Odyssey.

The world clash will be held at Pier one Montego Bay Jamaica, who will win?, we'll keep you posted.

Two Winners Declared at UK Rumble Sound Clash Mour Dan & Empire Sound - On Saturday, June 30, one of the most suspenseful clashes to hit England in quite a while unfolded in Telford, UK!

Are clashes necessary in Dancehall and Reggae music? - THE December 26, 2011 staging of Sting — dubbed Rumours of War — saw promoter Isaiah Laing returning to the clash format.

Sound System Jah Works Wins Japan Rumble 2018 - For over 30 years, Japan has been a strong market for reggae and dancehall music. The success of Japanese sound system Mighty Crown has inspired many home-grown 'sounds'.

Seems there is a Gaza vs Gully war brewing again. After the released of Vybz Kartel's step, many dancehall music lovers was wondering if the Gully Gad …

The Famed World Clash Culminates 20th Anniversary in Canada Not rated yet
New York, New York — October 2018 (Irish and Chin) — For Caribbean entertainment specialists Irish and Chin, sound clash is a way of life. And with …

The Famed 'World Clash' Gets a New Look Not rated yet
Staying true to their commitment of presenting the unique Jamaican art form of sound clash (intense sound system/DJ competition incorporating music, speech …

Peer War Inna Pier One Not rated yet
Peer War inna Pier One the first installment. The even was held on October 8, 2011 inside Pier One Entertainment Complex, Montego Bay, Jamaica. The …