For many years, the name Buju Banton (a.k.a. Gargamel) has become synonymous with modern reggae.

Having metamorphosed from a brash teenage phenomenon into a self assured deejay and singer, Buju's fusion of traditional roots rock, contemporary R&B and dancehall DJ'ing have earned him a prophet like status in his Jamaican homeland.

Undoubtedly, Buju is one of the most popular musicians in Jamaican history, having hit the charts there suddenly in 1992, with a string of hits including "Bogle", "Love Me Browning" and "Love Black Woman", all three of which were massive hits in Jamaica and less so abroad. 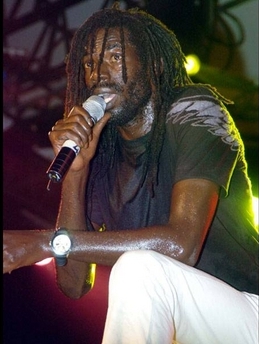 In his "Unchained Spirit" album, it is said that Buju demostrates unfettered devotion to his craft by extending his trademark toasting skills into the realms of rock steady, ska, gospel, African highlife and American soul. Among the bevy of guests featured on Unchained Spirit is fellow raga sensation Luciano, Sunsplash luminary Morgan Heritage and punk rock compadres Rancid.

It’s been 3 1/2 years since Buju Banton’s Grammy- nominated Friends For Life was released, but 'Too Bad' is definitely well worth the wait as the iconic deejay returns to his roots delivering his first pure dancehall collection since the days of Mr. Mention (1992) and Voice of Jamaica (1993).

Several of the tracks on Too Bad are already certified hits in dancehall's core market: “Hey Boy” (aka “Talk To Me”) peaked at #4 on Hot 102 Jamaica’s Weekly Top 30 chart; “Me & Oonu” on the “Wipe Out” riddim hit #3 on BBC 1Xtra’s Top 10 Dancehall Chart and moved up two notches to #22 on JA's Weekly Top 30; “Til It Bend” reached #3 on RETV’s Weekly Dancehall Chart; The street single “Nothing,”, produced by Banton and his Gargamel production crew, just broke into the Top 10 at #10 on the Weekly Top 30 and currently sits at #12 on the RETV chart.

In December 2009 Drug Enforcement Administration agents remanded Buju Banton to custody in Miami, where the U.S. Attorney charged him with conspiracy to distribute and possession of more than five kilograms of cocaine.

Banton was then moved to the Pinellas County Jail where he remained until trial. A six-day trial in Tampa, Florida was declared a mistrial on 27 September 2010, after the jury was unable to reach a unanimous decision.

During the trial, audio recordings were presented of Banton and a drug-dealer-turned-government-informant discussing drugs, drug prices and smuggling. Banton was also seen on a video recording meeting the informant in a police-controlled warehouse tasting cocaine from a kilogram bag.

The informant was reportedly paid $50,000 for his work on the case. The singer was released that November on bond, and a new trial was scheduled for February 2011 after prosecutors won reindictment. He was represented by well-known lawyer David Oscar Markus, who hung the first jury 7-5 for acquittal.

Buju Banton Could face more charges - WHEN Buju Banton is retried in a United States federal court next month, he could be faced with four counts of cocaine and gun charges instead of the two for which he was tried last September.

He was allowed to perform one concert between trials, which was held on 16 January 2011 to a sold-out crowd in Miami.

On 22 February 2011, Banton was found guilty of conspiracy to possess with intent to distribute five or more kilograms of cocaine, possession of a firearm in furtherance of a drug-trafficking offense and using communication wires to facilitate a drug-trafficking offense. He was found not guilty on the charge of attempted possession of five kilograms or more of cocaine.

Four months later, Buju Banton was sentenced to ten years and one month in a federal prison for the cocaine trafficking conviction. He is due for sentencing on the firearms conviction 30 October 2012, with the expectation of an additional five years to be added to his current sentence.

He is currently scheduled to be released in January 2019.

Buju Banton to get evidentiary hearing on December 20, 2012

Embattled dancehall artiste, Buju Banton whose given name is Mark Myrie got a major break in his ongoing case last week when a judge granted him an evidentiary …

The Garamel Buju Banton is Innocent

According to an article posted on miaminewtimes.com dancehall and reggae music artiste BUJU BANTON is innocent. The six (6) page article gives full …

The lies of the SYSTEM will not stand, the wicked shall surely perish. Free Buju now. Raymond Ahiadorme, Accra, Ghana

Buju Banton - Country For Sale Produced by Donovan Jermain Not rated yet
Fans of reggae superstar Buju Banton was up in awe on May 10th, 2019 after they were treated with long awaited new music from Buju. Buju Banton picked …

Buju Banton's First Show after Prison, set for March 2019. Not rated yet
Reports reaching us is that the Buju Banton also known as "Gargamel" first show after been released from prison will be in his home country Jamaica. …

No Early Release for Reggae Superstar Buju Banton Not rated yet
Jamaica-observer.com DESPITE reports that reggae singer Buju Banton may have an early release from prison, sources close to the entertainer say this …

Buju Banton's co-accused Ian Thomas released from prison Not rated yet
IAN Thomas, one of the co-conspirators in the Buju Banton drug case, has been released from federal prison. Thomas — who the Federal Bureau of Prisons' …

Buju Banton's 2011 Gun Conviction case threw out by judge Moody Today June 26 , 2013 Not rated yet
A US federal judge today threw out a 2011 gun conviction against reggae star Buju Banton. The decision means that Banton, whose given name is Mark Myrie, …

Buju Banton Is to Appear in Court On June 26th 2013 Not rated yet
Embattled Reggae/Dancehall superstar, Buju Banton will return to court June 26 in his juror misconduct case as he seeks a new trial. Buju, who's real …

Reggae superstar Buju Banton to get Another day in Court Not rated yet
The United States District Court of Florida has agreed to review the Defendant's Exhibit introduced at a December 20, 2012 hearing for imprisoned international …

Buju Banton's case stalled as juror's computer yields no evidence of misconduct Not rated yet
Embattled Reggae/Dancehall icon, Mark Myrie, more popularly known as Buju Banton has suffered a big blow in his charge for an early release from prison …

Buju Banton's Jurors Misconduct Case Gaining Traction! Not rated yet
Embattled Reggae singer, Mark Myrie aka Buju Banton may be gaining some traction in his juror misconduct case as one of the jurors in his February 2011 …

Buju Banton Juror Misconduct Trial set for February 19, 2013 Not rated yet
Embattled Reggae/Dancehall legend, Buju Banton will be back in court on February 19 as his juror misconduct trial continues to take shape. Banton, whose …

Positive twist in the mistrial case for embattled reggae star Buju Banton Not rated yet
Embattled Reggae megastar, Buju Banton may be gaining steam in his ongoing fight to overturn a ten year sentence on drug charges as his case for a mistrial …

I-Octane and Bounty Killer "Badmind Dem a Pree" produced by Markus Records Not rated yet
Producer Markus A Myrie of Markus Records, who is also the son of reggae superstar Buju Banton has just premiere today September 6, 2012, what most music …

The Gargamel Buju Banton's conviction upheld Not rated yet
Any lingering hopes that embattled Dancehall/Reggae superstar, Buju Banton would cop an early release from federal prison have been dashed as it's been …

Buju Banton Lose Your Love Markus Records February 2012 Not rated yet
Even though reggae superstar Buju Banton is in US prison serving Ten Years for drugs charges. His son Markus now producer of Markus Records is making sure …

U.S.Government wants to reinstated gun charge against BUJU BANTON Not rated yet
The United States government has issued its first public response to the recent appeal made on behalf of international Reggae superstar, Mark Myrie, more …

Buju Banton transferred to Miami Prison Not rated yet
The dancehall reggae entertainer, who went from Florida to Oklahoma to Texas, then back to Oklahoma is en route to the Federal Correctional Institution …

Set Buju Banton Free, send him home Not rated yet
Let him go. There are more drugs dealer in USA to catch other than this one man who didn't even get the drugs. What I'm really saying,I looked on TV …

The Gargamel Buju Banton said thanks to his supporters Not rated yet
After his conviction in US Tampa Bay federal court on three charges by a 12-member panel of jurors. In a statement read by his lawyer David Oscar Makus, …

Buju Banton found guilty Not rated yet
FLORIDA, USA – Reggae star Buju Banton was found guilty on three charges by a 12-member panel of jurors a short while ago at the United States Sam M Gibbons …