Stone Love is one of the most decorative sound system in Jamaica to date.

It made its entry into the dancehall business in the early 1970's - It has been for the past 37 years the sound system with the most dancehall patrons. 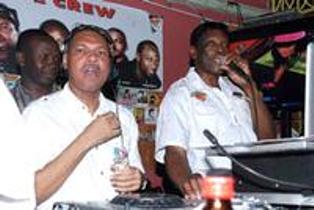 Promoters are of the view that it is the best in the business. The House of Leo was where it played mostly in the 1980's and patrons would boast about going to hear stone love's entertainment.

Owned and operated by Winston "wee-pow" Powell this has been one of his best investment.

Powell was 17 years old when he purchased a component set from a technician. He continued to purchase and add equipment until he made them into a nice little sound.

From the start he had the support of his brother Cecil Powell and Winston Rooms.

Maintaining a sound is hard work and giving the perfect name is important. Wee-pow actually went through three names before finding his true love.

Sir Coxone, Pisces and Stone in love were actually the names he choose before find deciding to go with the current name.

This was mostly an uptown sound and was not introduce to the down town community also known as "Ghetto" until 1983.

This sound plays all genres of music and if you should attend any of its session, you are sure in for a treat.

Love is one of the most sought after sound system locally and internationally, Bookings sometimes are done up to 9 months in advance. " Quiet a demand".

An Anniversary dance is held every December. The sound was formerly sponsored by Guinness but now its under the sponsorship of Magnum. Selectors/DJ's are Wee-pow, G-Fuss, Billy Slaughter, Rory, Nico, Bill Cosby, Jet Lee, Duane Pow, Richie Feelings and Diamond. Its Headquarters are located at 41 Burlington Avenue Kingston.

Every week there are two parties held at the headquarter "Weddy Weddy" and "Uptown Monday" which attract a large turnout of dancehall fans.

The sound system spawned the Father Pow record labels that have released hits by the likes of Bounty Killer, Jigsy King and Tony Curtis, Capleton, Tanya Stephens, and Daddy Screw.

In August 2014 it was announced that Powell would receive the Order of Distinction in October that year.

To celebrate its 42nd anniversary, the sound system toured the US in a series of performances that will culminate in an event on 27 December 2014 at the Red Stripe Oval in Kingston.

This is the promo mix by world Immortal Stone Love Sound System.
The Party was schedule to be held on March 2, 2013.

steel divinity Not rated yet
bless big up the sound for live. check out mi album king.http://www.juno.co.uk/labels/Firesticks+Production/ steeldivinity@gmail.com

STONE LOVE CELEBRATES THE BIG 40  Not rated yet
It’s fast approaching 2.00 a.m. on Thursday and not even the rains stopped the crowd from pouring into Stone Love Headquarters on Burlington Avenue for …

Rory From The Mighty Stone Love (Jamaica) releases "The Midnight Riddim" Not rated yet
THE BRAND NEW EP RELEASE ON ‘THE MIDNIGHT’ RIDDIM’ FEAT. ADELE HARLEY, NADINE SUTHERLAND, INDRA AND KEIDA. “APTLY NAMED ‘MIDNIGHT’ DUE TO THE RIDDIM …