March 2018 — Toronto, Canada (Irish and Chin) — The 2018 season of the Rumble sound clash series kicked off with a bang in Canada on Saturday, March 2, seeing Mystic Sound as the new Canada Rumble champion! 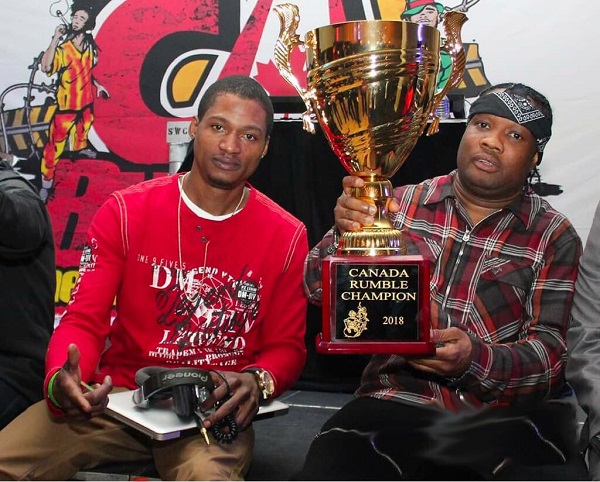 "Canada Rumble served as the ideal launch for this year's Rumble Series," says Garfield "Chin" Bourne of Irish and Chin. "I love the energy and excitement surrounding clash in Canada, as we searched for the next stars of sound clash. I am proud of the sounds' efforts and salute the new Canada Rumble champion, Mystic Sound."

The highly competitive clash was thoroughly entertaining, yet challenging, as new rules were introduced. Most of the sounds delivered impressive sets with 45 selections gaining the most forwards of the night, colossal at times. Some sounds did at times fall short of fans' expectations. With the purpose of keeping the Rumble Series fresh and exciting, while properly grooming sounds for the World Clash stage, new entries at Canada Rumble included Mystery and Rapid Fire rounds.

For the Mystery round, various categories/themes of Reggae and Dancehall music were put in a hat for sounds to choose from (i.e., Singers, God Bless, Ganja, Bad Man, Combination, etc.). The Rapid Fire round replaced "Tune fi Tune," allowing sounds to shoot uninterrupted red-hot dubs for 20 minutes, with audience voting following the round. While some sounds grasped the concept without a hitch, others struggled to deliver.

As fate has it, the final round erupted into a face off between Mystic (with Tyrone/Fabian) and Klymaxx (with Squidly and Specialist). With Rapid Fire being taken over by two "bad" sounds, it wasn't long before fans could pick out each sound's unique skills.

While Klymaxx's team boasted extreme coordination and organization to complement their firing of tunes, Mystic Sound displayed over-the-top energy, especially as the MC, Tyrone, worked the stage with a kinetic performance, engaging the massive crowd. Big tune "did a play" the whole time....but in the end -- it was Mystic that won over the crowd.

Mystic Sound is made up of DJ Tyrone (Tyrone Davis), his brother Paul, Fabian, Leslie and DJ Randy. It was founded by Leroy McPherson in Jamaica in 1995 with Tyrone and Paul continuing the sound upon their migration to Canada in 1997.

Other Rumble clashes, which are scheduled for Antigua (March 31), United States (May 5), United Kingdom, Germany and Japan (June 9), will lead up to World Clash later this year in Canada.