Two Winners Declared at UK Rumble Sound Clash Mour Dan & Empire Sound - On Saturday, June 30, one of the most suspenseful clashes to hit England in quite a while unfolded in Telford, UK!

The "UK Rumble" and Jamaica’s international art form of sound clash peaked in an unprecedented finale to the 2018 Irish and Chin Rumble Series in the wee hours of the morning with two winners declared, Mour Dan and Empire Sound.

Two of Birmingham's most feared sound teams will head to the famed World Clash in Toronto, Canada in October 2018.

The Ice Lounge served as sound clash central for the night, as dedicated fans poured in to route for their favorite sound systems. The sold out crowd cheered and jeered as the line up, also including Music Master, Foundation, Will Powa and Jahman Nuclear, engaged in a full out music war. 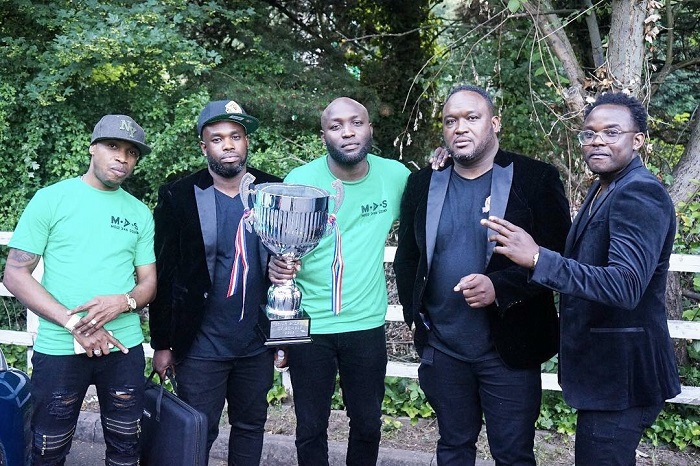 One of the hottest things about "UK Rumble" this year was each sound's ability to consistently deliver and thrill the audience through out the night.

Despite commendable sets from some of the UK's toughest sounds, it was Mour Dan and Empire Sound that emerged as the night's shining stars. Upon knocking out all competition in early rounds, Mour Dan and Empire deservingly landed in an epic "rapid fire" aka "tune-fi-tune" round. It was at this point the entertaining clash reached it's climax. With both sounds hailing from Birmingham (aka Badlands) and lots of supporters in tow, the crowd was unable to pick a clear winner of the clash -- causing constant re-voting. Since the votes were extremely close and it was impossible to pick one winner, the promoters declared a draw and awarded both sounds.

"Without a doubt, 'UK Rumble' was the most unpredictable clash of the Rumble Series. But that's what makes sound clash the exciting sport that it is. Suspense and predictions of who will win contribute to the overall sound clash experience. Once a clash reaches a level of the audience having trouble deciding a winner, that's when you know it was indeed a great competition," says promoter Garfield "Chin" Bourne of Irish and Chin.

Empire Sound has been active for a decade, making a name for them selves in Birmingham and the rest of the UK sound clash scene. The confident team, which consists of Marvin Empire, Doctor C, Brando Unruly and Bredda Screw, came to prove that a UK sound can make it on the big stage and declare that team morale, entertainment factor and tune selections gave them the winning edge.

Just 4-years old, Mour Dan sound believes that "UK Rumble" was the perfect platform for showcasing their talent to the rest of the world. Based in both Birmingham, UK and Jamaica, Mour Dan boasts a large team that includes Phil Trooper(Owner), Hurricane Jermaine, DJ Katarack, DJ Fresh Prince, DJ Rice, DJ Adam and DJ Squit. Plus, on the night of "UK Rumble," Tony Crystal and DJ Niko assisted the team. Living up to their slogan, "The Sound of Prominence," Mour Dan confirms that their high quality performance and music offers an unforgettable "winning" experience for fans.