Reggae artist Anthony Campbell - It was thirteen Year ago, that Anthony Campbell first began his career entered into the world of music, since then he has made an impressionable mark as a talent vocal artist, songwriter, producer and businessman. 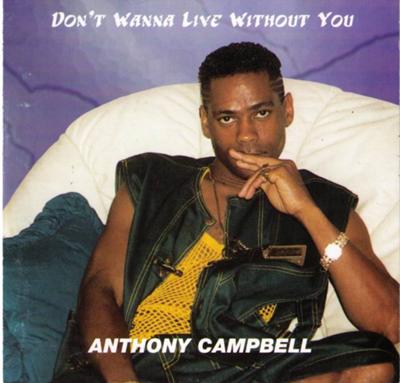 His story is one of admirable courage ambition, determination And a true spirit of overcoming.

Born in Stratford, to Jamaican parents he migrated early to the island of Jamaica at the young age of six located first in the rural parish of Trelawny in his primary years of schooling before progressing and later moving into Holmwood Technical high school in Manchester where he would graduate.

Whilst living in Jamaica, like most singers he was very much involve in the church singing on the choir doing concerts all over the parish including doing drama plays and finding a gospel influence that would later echo in his career as an artist.

Years after his departure from England, he returned in March 1997. In true testimony to his character he soon qualified in a new professional capacity as a psychiatric nurse and would spend most of his time during this period writing songs and working on his vocal skills.

The road wasn’t easy and in spite of initial performances he fails to gain a real national exposure. However, determine as ever he continued to sing and with encouragement from friends and colleagues he endeavored to increase his abilities rather than to let someone sing and perform his songs.

His pursuit for excellence and passion as an entertainer is a positive ongoing trait that would fuel his ambition even in the face as great tragedy and disappointment that would follow in his life in the near Years to come.

In the initial Years that followed he would continue to concentrate on his song writing and vocal abilities, working hard to perform and later record his own work. After facing many obstacles within the music industry he decided that the forward would be to do things for himself – a move that would later silenced the “doubters” and “haters” he had already come across.

In 1994 he decided to record and releases his first single entitled “Forever” (RnB) which entered the Body Music reggae charts at No 16 though it wasn’t reggae. A Year later he followed with another release called “Where Is the Love?” before embarking upon a reggae remake of a popular soul hit by Wayne Marshal “G-Spot” in 1995.

His hard work paid off and it was noted as the song that would first carve a notable mark in the heart of listeners local, national and abroad.

The song charted at No: 2 in the echo charts and the success of this release culminated in many live stage performances and frequent “popular demand” request due to the electric stage presence, drama and memorable charisma he would deliver to his audience each time he performed internationally.

For Anthony, this experience was not only the beginning of a promising career but also sparked a new found personal confidence for his ability as an artist, something that other people had once told him could never happen.

He later go on to work with some top producers, artists and DJ’s/studios in the industry including Penthouse Records, Shocking Vibes, Don one Studios, Hit Room, mafia & Fluxy and others.

In 1995 he release his first album entitled “Your Special Gift” which climbed into the echo charts at No: 17 many of the songs on the album including the roots/gospel song “Freedom” and a “prayer” caught the attention of some of the most reputable music leaders in the reggae industry including Penthouse Records in Jamaica and Jet Star who were now familiar with the

name “Anthony Campbell” in recognition of his song-writing and production abilities and as an entertainer.

Other releases follows including the soul song he wrote and produced in 1997 entitled “Don’t Want To Live Without You” which made the echo charts at No: 9, the UK national charts at No: 73 and achieve No: 1 status in Barbados it made the their into there top ten.

In 1998 he polished up with a solid rendition of “The Carpenters” classic entitled “Rainy Days & Mondays” which placed him firmly on the global reggae market as a singer to be taken seriously selling 27.000 copies in its first six Months.

After receiving thousands in record sales, he gained more exposure throughout media nationally and internationally including newspapers articles, radios adds” and interviews such as CBC Barbados, RJR, Irie FM Jamaica as well as live sessions on the BBC and TV abroad his numerous stage performances and live PA’s internationally meant that often found himself line-up as artist as he work with the following such as Dennis Brown, Sugar Minott, Marcia Griffiths, Beenie Man, Ninja Man, Ernie Smith Buju Banton, Dawn Pen and Hugh Brown.

Now widely recognized as a talented artist and producer he now own his own record company head office in the UK with branch offices in Germany, Holland and Ireland and now he open another in the United States of America that was birthed out of difficulties he once faced when trying to make it out here in his own.

His own struggle heightened his sensibilities/awareness within the industry and ignited an empathy in hi to create something whereby he could help himself and others to pursuer the goals in music and hopefully achieve them, “ I tried to get a deal but record companies just would not listen. Everybody says they liked my stuff. Promise would be made but nothing would happen”

After four Years as director of his own company, he is the first to attest international success and achievement did not comes easy and is a stark contrast to his early days. Now a successful growing international corporation, Stringbean International Records Limited one of Europe largest head office in the UK with branch offices in Germany, Holland and Ireland and now he open another the United States America and a agent in Jamaica.

He continues to record, manage promote and distribute his own music and music and other artists and companies World-wide he also has link to major companies and artist World-wide (his company was the first to break Sean Paul Gimmi The Light in the UK) as they trade music the company has gone on to become recognized World-wide as one of the most effective in it’s field, often releases records and distributing products music and media of reputable quality to places other companies had found it difficult to.

All this has motivated him to seek new challenges and he feels rewarded when he learns that his artist records have being played or achieving sales faraway Countries such as Australia, Far East Middle East Africa the West Indies and the whole of North and South America. After all that is what his company is about.

As with his own musical career, Anthony Campbell works fervently to help artist and producers alike to gain the recognition and achievement they need to help further their career in the music industry.

His latest release is a cover version of a Commodores/Kenny Rogers classic “Lady” infused with a passionate, memorable delivery and makes a new standard for this talented artist increasing vocal ability, production skills and overall drive to succeed.

He now has a new song that he has voiced on a compilation CD for a label namely B&M records a UK base label Jamaican producer the song is call No Getting Over The Rainbow which is doing well on the radio waves and hope to do well on sales. This CD has the likes of Tony Curtis, George Nooks, Lukie D and more.