Judy Mowatt Reggae and Gospel music artiste - Jamaica's Queen of Soul - Jamaica's First Lady of Worship Although the music business has seen hundreds of gifted female artists, there has been, but a handful who compose their own music. 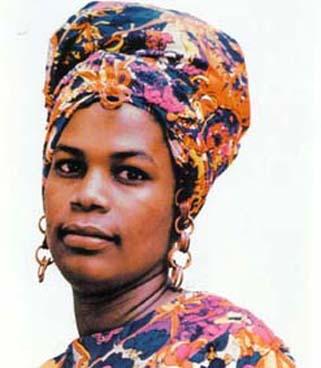 JUDY MOWATT, who for years was a key member of BOB MARLEY'S 'I-THREE', is one of those rare women who control their artistic destiny.

As a result, she has achieved an impressive chain of accomplishments She became the first female singer nominated for a GRAMMY in the category of reggae music when her 'WORKING WONDERS' LP was nominated in 1985.

She was the first female reggae artist to appear on LATE NIGHT WITH DAVID LETTERMAN, when she made her debut that same year. Her 'BLACK WOMAN' LP is considered by many critics to be the greatest reggae LP done by a female artiste. It was the first reggae LP recorded by a woman acting as her own producer.

Her commitment to meaningful lyrics made her a renowned advocate of important issues concerning women, spiritual inspiration and African liberation. 'LOVE- IS OVERDUE' included on the SHANACHIE LP made her the first female reggae singer to score a major American pop hit.

Magnificent voice, fertile composing talent and stunning beauty, JUDY MOWATT has all the ingredients necessary to take her trend - setting music even further into the international arena.

Judy Mowatt was born in Industry Village, Gordon Town, St. Andrew Jamaica, some forty-five years ago. Her family was poor and although no one went hungry, they could not afford a radio in the house.

As a child, singing came as naturally to her as breathing and she was always 'singled-out' for solo spots with church choirs. While in school, which were Holy Trinity and Kingston Commercial Schools, she became a member of a dance troupe, which toured Jamaica and the Caribbean.

JUDY'S aspiration was to become a registered nurse, but by divine purpose, that was not to be. She later discovered that GOD'S purpose was for her to nurse and restore healing to the hearts and soul of mankind through her music.

A coincidental meeting with two teenage girls who were earlier in her dance troupe led to the formation of the GAYLETTES, in 1967. They rapidly became one of the most popular singing groups on the island after being asked to sing backing tracks for Federal Records.

The Group later recorded several hits on the Federal Records Label. Although contractual snags forced her to record under other names, by early seventies, she had launched her solo career with both soul ballads and reggae tunes.

She had a number of hits including 'I SALL SING' (later covered by ART GARFUNKEL), 'WAY OVER YONDER' and 'EMERGENCY CALL'.

She then teamed up with Rita Marley and Marcia Griffiths to form the I-THREE, who became BOB MARLEY'S backing vocals when the original WAILERS, PETER TOSH and BUNNY WAILER left the group in 1974.

Their soaring harmonies, majestic costumes and dance movement (choreographed by JUDY) were -highlights of BOB MARLEY concerts as they accompanied him on his historic global odysseys.

Meanwhile, JUDY had her biggest solo hit with 'MELLOW MOOD' a BOB MARLEY composition that became the title track on her first solo LP in 1975. Constant touring with BOB MARLEY prevented JUDY MOWATT from concentrating on her solo career. It was not until 1978 that her landmark second

Produced by JUDY and FREDDIE MCGREGOR, the record features several moving compositions such as 'JOSEPH', (a soulful ballad tribute to BOB MARLEY), 'SISTERS CHANT, STRENGTH TO GO THROUGH' and the title track 'BLACK WOMAN' celebrating the strength and dignity of black women, this LP still remains one of the greatest reggae album ever recorded and produced by a woman.

Subsequently, the albums expanded her music in many directions as she focused on her life as a Rastafarian Woman and then the special concerns of women.

Her third LP, 'ONLY A WOMAN', confirmed her position as a spokeswoman for issues against affecting her as a woman, featuring the title tracks 'ONLY A WOMAN' and 'I'M NOT MECHANICAL'.

The Almighty God has tremendously blessed JUDY MOWATT. "To whom much is given much is required", that is what she believes; it is her God given duty to give back to the society, that nurtured her.

In 1994, she spearheaded an organization called CONCERNED WOMEN IN ACTION, primarily to assist "The Forth Augusta Correctional Center For Women' to obtain a well needed stand-by generator. This was accomplished with the aid of the BRITISH HIGH COMISSION after staging several fund raising concerts both in Jamaica and in this United States of America.

This has since increased awareness for the needs at this center. JUDY is still constantly involved in the organizing and planning of many charitable projects for various institutions.

Although she was a devoted Rastafarian for twenty-two years, desiring to please God all the way, she suddenly became overshadowed with a feeling of emptiness and total dissatisfaction. Hunger for the whole truth arose and led her to numerous churches.

In 1995, a friend invited her to a crusade held by BIBLIE TEACHERS INTERNATIONAL MINISTRY, there was an altar call and JUDY still remembers wanting to go to the altar, but looking around at the congregation, it seemed to her, that they could all read her mind.

She could imagine it being in the media the next day and was not sure that she was ready for that kind of publicity. However, when the last person walked to the altar, the Holy Spirit suddenly moved her, from heir seat towards the altar. Midway down the isle, the preacher held on to her hand and said, "If you didn't come, I was coming to get you".

She prayed for JUDY saying, "Lord she has searched for you in different places and the image she has of you is a false representation." The preacher was a woman from overseas so it was impossible for her to know hey inner thoughts.

This had to be the discerning of the Holy Spirit. She knew instantly this marked the end of her search. "Jesus is the Way, the truth and the light." Several months following that revelation, she came to face with two of the most difficult situations in her life when she had to draw on the grace of God through the Holy Ghost along with spiritual support from her pastor then, Bishop Dr. Sam Vassel of the Holiness Christian Fellowship and her friends in the Christian Community.

JUDY MOWATT is now a born-again, spirit-filled child of God and is now a member of THE BIBLIE TEACHERS INTERNATIONAL MINISTRIES, since her turning-point experience.

She has broadened her repertoire with a series of gospel songs and is now busily spreading the Gospel of Jesus Christ. She released her second gospel album entitled "SOMETHING OLD, SOMETHING NEW" in November 2OO2.