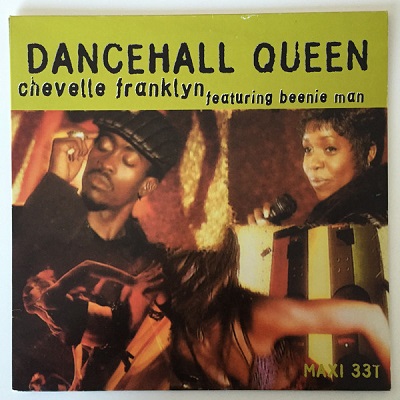 The single featured the self-proclaimed King of The Dancehall Beenie Man and Chevelle Franklin who is now a gospel artist.

When the track was first released it was only available on 7inch and 12inch Vynl. It was later made available on compact disc.

The song can be classified as Electronic or Reggae genre of music. But fans worldwide will say its dancehall music, it was also styled as house music due to the fast tempo on the track.

Dancehall Queen ft Chevelle Franklin was inspired by the Movie with the same name starring Marcia Audrey Reid. In the movie, Marcia (Audrey Reid) has a tough life in Kingston, Jamaica, where she's the sole provider for her teenage daughter, Tanya (Mark Danvers).

Her business as a street vendor is threatened by thug Priest (Pauline Stone-Myrie), and Marcia makes matters worse when she accepts money from Larry (Paul Campbell), who has eyes for her daughter.

To get out of her problems, Marcia devises a plan that involves entering a dance contest in disguise, winning the top prize and pitting both men against each other. The main soundtrack for the movie was Beenie Man and Chevelle Franklin's collaboration "Dancehall Queen".

The song was mixed by Bonzai and Johnny Most, Drums was played by Sly Dunbar on Bass was Robbie Shakespeare producers was Sly & Robbie.