Just like Bob Marley and most of the reggae and dancehall artiste in the industry today he too is a rastafarian. 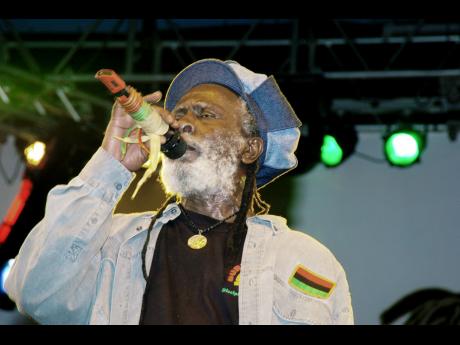 He started his musical career in 1969 with the late Sir Coxsone Dodd. His first single recorded and release for him was "Door Peep".

But as we say all good things must come to an end. After six (6) years they parted company and he started working with "Jack Ruby" who's studio was in Ocho Rios. This led to one of his biggest single "Marcus Garvey".

In 1977 he parted company with Ruby and started working on his own label. In 1977 his first tour came, which take him to the United Kingdom.

Spear is now living and working in Queens New York. Currently working and preforming under his own company called "Burning Music Production Company".

He has won two (2) Grammy for "Best Reggae Albums" and also have (12)albums Nominated for this prestigious award.

Truly a legend from the Bob Marley era who continue to do positive roots reggae music.

For his contribution to this great music, in 2008 he was given the Order Of Distinction by the government of Jamaica.

Both Etana and Spear are booked to perform at the same show in the US., however, her Guitarist was contacted by Burning Spear's team to come and work with him.

Etana tells the Zee, that upon realising that the Guitarist will also be working for her her, she said Burning Spear refused to work with him.

Meanwhile Etana describes Spear's move as 'being petty', noting that this only affects the industry in a negative way.