Dancehall reggae artiste Spice, Charismatic, sexy and lyrically lethal are words that could be used to describe the fast rising lady.

who from her first major appearance at Sting 2000 made it clear that she was in the business to stay. Unfazed by the huge crowd that faced her, she delivered an awesome performance earning four encores in the process. There was no doubt about it, she made dancehall world stood up and took notice.

Hailing from the Old Braeton community in St. Catherine Grace Hamilton aka Spice was an avid lover of music. While attending St. Catherine High School she, year after year entered the Jamaica Cultural Development Commission’s (JCDC) festival contest in music, singing her way through the judges hearts and winning a gold medal each time for her school. 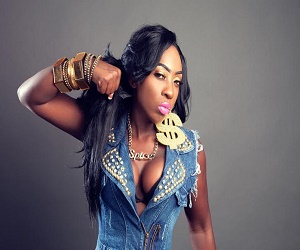 Although she was good at it, she never really thought she would end up working full time in the music industry. She was too busy focusing on her school work so much so that she graduated fifth form with all of eight subjects.

With a career in chartered accounting in mind and plans to go on to sixth form somewhere along those lines Spice decided she would much rather focus on a music career.

With that decision made she enrolled at the Edna Manley School for the Visual and Performing Arts to do voice and drama Spice got the break she was looking for in 1999 when she appeared on a show Nuffy had at the time on JACS cable called Many Moods of Nuffy.

After her exposure she started getting a lot of positive feedbacks from friends and those who had seen her – all encouraging her to take it up as a career.

She went from singing into dabbling into dejaying and found out she really had the crowd going when she did…it didn’t take her long to focus on where her strength was – as a DJ. In 2000 Heavy D from Supreme Promotions saw her dejaying and wasted no time in giving her the chance to perform at Sting 2000…needless to say his confidence was well merited. Early 2002 Spice went on a tour in England with Ward 21 and Baby Cham.

With no hit to her credit, Spice totally devastated the audience and in the process earned the respect of Baby Cham. He wanted to know why she didn’t have songs flooding the airwaves. She confessed to not having the links to establish herself. He assured her he would introduce her to Dave Kelly when he went back home…a promised he kept and saw her releasing her first single for Mad House, ‘Mi Gone’ on the Pretty Pretty rhythm did well both locally and overseas.

That same year she returned to Sting stage with a performance that left Elephant Man in her shadows! Spice went on to later record ‘Hype’ and ‘Right There’ (with TOI) on Dave Kelly’s Bad Gal rhythm and the videos for them created even more inroads for her.When she released ‘Fight Over Man’ it created a rave in the dancehall.

A lot of female artistes find that pregnancy slowed them down, but not this lady, she took it in strides making her probably the only artiste who worked through her pregnancy, giving birth to her son and six weeks later was back on stage! Being a mother has now changed her career perspective and that includes being more professional about the business.

She is now working with team of professionals which includes publicity firm Khool International headed by Ray Alexander, booking agent, stylist, road manager, street team and of course she already has Mad House dealing with most of her productions although she voices for other top ranked producers.

Another improvement with the talent lady DJ is the fact that she will be doing more radio friendly songs in a bid to be more “corporate friendly”. She has just wrapped up recording three singles ‘I’m Back’ on the North Coast rhythm for House of Vibes, ‘Done Out’ on Dem rhythm for Ward 21 and ‘Inna Di Light’ on the Gear Box rhythm for Truck Back. There is no doubt – she is back and she intends to keep a commanding presence on the scene

Spice So Mi Like It Hits 79 Million Views - Female dancehall entertainer Spice is today July 11, 2018, celebrating another milestone as the video for her single "So Mi Like It" which was released in 2014 hit 79.2 million views on youtube.

Other Pages Of Interest....

Spice Launches Women Empowerment Foundation - Dancehall diva Spice flew home for the long weekend to for the official launch of her nonprofit aimed at enriching women’s lives through education and entrepreneurial endeavors.

Was Spice Too Ranchy For Coperate Jamaica. Did they pull the plug on her performance? Read her response below My Riddim stopped playing when I …

Spice Hit 2 Million Followers On Instagram Not rated yet
Congratulations are in order for Female dancehall recording artist Spice. Spice reached another milestone when she became the first artist from Jamaican …

DOKTOR teams up with SPICE on the release of his New Hit Single “Down For Me” Not rated yet
DOKTOR does it again with brand new follow-up single, “Down For Me”, featuring SPICE released 24th August 2018, via AV Records. The Relentless Hit-Maker …

VP Records still working on Spice's album  Not rated yet
Although she came out firing, VP Records is not giving any hint of the label going head to head with recording artiste and client Grace 'Spice' Hamilton …

Organisers claim innocence After Spice Set Was Cut Short, Said Its Her DJ Fault Not rated yet
The organisers of the Rio Sports Gala and Awards ceremony have denied interrupting the set of dancehall artiste Spice last Saturday night. The deejay …

Spice - Uh Oh Lyrics Not rated yet
You coulda bex tell you blue The man like the little things weh me do And me know him love me more than you Be, because me just know fi do the thing …

Notnice Records Presents Spice & Busta Rhymes "So Mi Like It" Remix Not rated yet
Kingston, Jamaica (MPR Consulting) - By all accounts it seems as if producer Notnice lives in his studio 24/7. The acclaimed producer has been delivering …

Dancehall artiste Spice And Hubby In Row Over Pics  Not rated yet
Female dancehall deejay Spice is at the center of what seems to be a domestic dispute with the father of her two children. Spice’s boyfriend Nicholas …

Spice hot patty wine Lyrics Not rated yet
Intro: Unnu ready??? Dem no bad like me Verse 1: None a dem Gal yah wine like me Not even Shakera no bad like me Dancehall queen nave nuthn …