Baby Cham whose real name is Damian Beckett was born in Sherlock Crescent in Kingston, Jamaica.

Baby Cham love of music outweighed his talent for football and from his teenage years he devoted himself to developing his microphone skills. 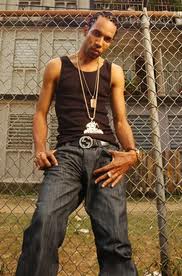 Cham started out in the music business working with the Mad People Gang also known as Madhouse Productions. This relationship led to the released of hits such as Many Many, Boom Tune and Man & Man, all of these singles were also featured on his debut album.

His debut album "Wow: The Story" was released in 2000 and this album led to a whole heap of doors being open for him.

Any such doubts were laid to rest in 2003 by Chams crossover hit Vitamin S, a boisterous bedroom boast bouncing to the beat of Madhouses irresistible Fiesta riddim.

The tune jumped from Jamaican sound systems to worldwide radio and club play, mesmerizing the hip-hop massive and proving beyond question that the raw uncut sounds of Kingstons dancehalls could rock the world. Cham soon signed a deal with Atlantic Records, home to Jamaican hitmaker Sean Paul and Yankee rap stars like Lil Kim and Fat Joe. But his story was just beginning.

Rather than rushing to cash in with a quick & dirty CD, Cham and Madhouse mastermind Dave The Stranger Kelly took their time to make sure that the new album would be up to standard.

The creative force behind records like Bogle by Buju Banton, Action by Terror Fabulous & Nadine Sutherland, and Dude by Beenie Man & Ms. Thing, Kelly overstands how to conjur up studio magic with Cham; the duo enjoys the sort of rare creative chemistry enjoyed by the likes of Dre and Snoop, but in a dancehall context. Me and him click, says Cham. Well be writing, and hell want a word, and by the time hes supposed to say it, Im sayin it.

There are a million stories in the ghetto. And yet theres only one Ghetto Story. And like the song says, its a survival story... ....In Jamaicas ultra-competitive music scene, stars are born every day and fade away just as fast.

But ever since the mid 1990s, Baby Cham has represented the best of cutting-edge dancehall reggae. His every release seems to bring forth new sounds, new slang, and up-to-the minute ghetto news reports guaranteed to bust the dance.

Spelled with a C (like champagne), Cham should not be confused with any Flipmode Squad affiliate, although he has been known to bust a rhyme from time to time. With his athletic good looks, his booming baritone voice, and a catalog of hits that wont quit, Cham has managed to stay ahead of the times for longer than any other DJ in the game. And with the release of his long-awaited album Ghetto Story, Chams poised to take dancehall to another level all over again.

With just a little over two and half months gone out of the year 2012, Baby Cham now popular known as Cham has already released Four songs all of which …

Dancehall artiste Cham: Dancehall's revolutionary fighter  Not rated yet
The Jamaican deejay on political corruption, early morning wake-up calls, and planning his family around the economy. COMBINE TWO of dancehall’s most …

Cham Lawless official video Not rated yet
Baby Cham has released the video for his single "Lawless" on the riddim with the same name, which is produced by Music/Madhouse Records/JA Productions. …

Cham featuring O "Back Way" official video Not rated yet
Veteran dancehall artiste Baby Cham popular known as Cham has released the video for his latest single Back Way featuring "O". The video shows a lot …

Cham feat. O "Tun Up" official video Not rated yet
This is the official video for Cham feat. 'O' for their lastest single "Tun Up". The video was directed by Roger B Stillz for producers Madhouse/First …

Are there Tension between Mr G and Baby Cham? Not rated yet
Well, according to an article posted on Examiner.com website, Mr G have some thing to say about Cham and an interview which he did on CVM TV "Onstage Program". …