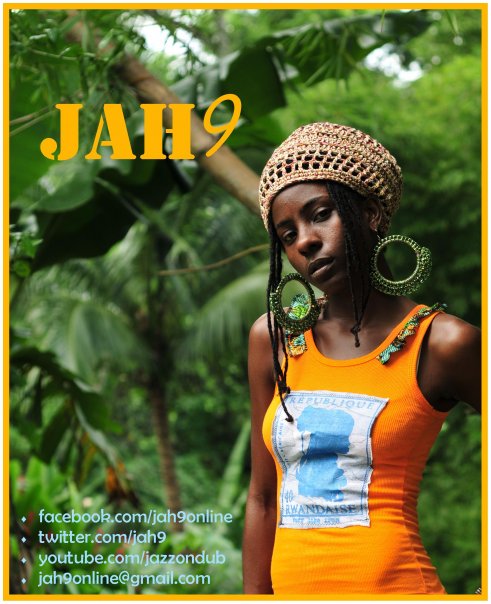 Singer/songwriter/activist Janine ‘Jah9′ Cunningham brings her refreshing mix of contemporary and conscious poetry to the stage and delivers a mature, sophisticated style with a unique and captivating energy all of her own.

She has been credited as the creator of the Jazz on Dub genre. Her vocals blend the Jazz melodies of Billie Holiday and Nina Simone with the Dancehall attack of Sizzla Kalongi above the heavy Dub rhythm akin to Augustus Pablo.

Her highly anticipated debut album is slated for release in 2012 but Jah9 is already in demand as a songwriter and creative director of repute. Her single ‘Warning’ has already received heavy spins on local and international radio as was voted as SONG of the YEAR by German based RIDDIM magazine.

She was born in Montego Bay, Saint James on May 23, 1983. With a Baptist minister for a father and a teacher and social worker for a mother, young Janine Elizabeth Cunningham lived much of her childhood in the town of Falmouth, Trelawny.

On moving to Kingston at the dawn of 1991, Janine was immediately struck by chaos disguised as order in the nation’s capital. Concepts of community were seemingly misrepresented by political endeavors. It was only a matter of time after leaving University that she would sacrifice financial security to satisfy her true passion.

Every song contains a message inspired by natural and universal laws. As a cultural activist Jah9 is committed to youth empowerment and nation building through Arts and Culture. She uses her voice to call attention to the abusers of power and also highlights the need for spiritual growth in everyone, including herself. “I am my designer from concept to execution,” she reminds us in the single ‘Designer’ about the innate ability to control our own destiny.

During live performances, Jah9 compels audiences to pause, stare, reflect, be inspired and feel empowered. She opens minds and soaks them in knowledge and positivity; all while onlookers remain in a trancelike state. By no means is Jah9’s musical ascendancy accidental and it is obvious to keen observers that she is with us for a very good reason.