The event offerings in 2017 include activities on three stages with live music from around the world, and an Island Dance Showcase.  The event also features carnival rides for children, the USO Car Club Showcase, a Youth Rugby 7’s tournament,  an Island Tattoo Showcase and a free Diabetes Awareness clinic. The gates open at 11am and the event concludes at 11pm. 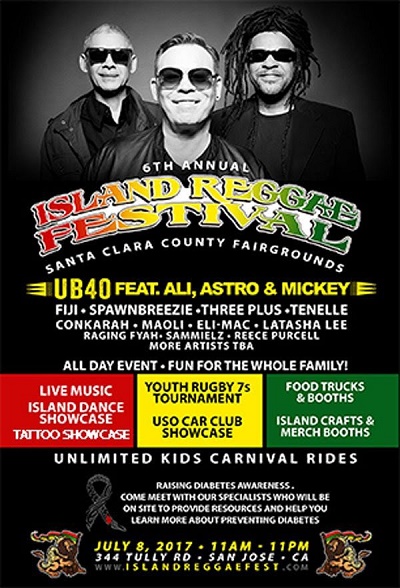 Artists on the lineup for Island Reggae Festival consistently feature some of the Pacific Islands’ greatest talents living throughout the world and those that have been embraced by Island Reggae music culture. In 2017 the lineup includes the United Kingdom’s UB40 featuring Ali, Astro and Mickey whose songs “Red Red Wine” and the remake of  the Al Green original “Here I Am” have continued to be worldwide pop hits and in island reggae rotation over the past 3 decades.  UB40 will perform the closing set at Island Reggae Festival 2017.

Returning to the Island Reggae Fest 2017 stage is the legendary Fiji whose stage name reflects his cultural background and whose golden voice has made him a pioneer of the Island Reggae sound as its most well-known artist paving the way for the careers of many others in the genre, whom he has personally mentored, recorded, and co-wrote with throughout the years.

Combining the rhythms of  Hiphop and Reggae with the soulful, power of the island music vocal style, Spawnbreezie has created a unique sound that he calls “Island Hiphop”.  The Island Reggae Festival 2017 audience will have the chance to hear live on stage, hit songs like “Don’t Let Go” and “Oh My Goodness.”

Female vocalist of Samoan heritage, Tenelle returns to the festival in 2017 with sweet vocals influenced by R&B and reggae reflecting this Carson, California born singer’s background. Her latest album FOR THE LOVERS released March 10th of this year features 11 tracks with a romantic theme and includes duets with Fiji and Chazrox.  It’s maintained a top position on the iTunes Reggae chart since its debut.

Making their return to the mainland for the first time in several years is Hawaii’s Three Plus, the Island Reggae Fest 2017 family is in for a special treat with their appearance on this year’s lineup.

A top 50  finalist in 2012 on the television program X-Factor, Latasha Lee comes to this year’s festival prepared to sing some 1960’s style soul vocals on her original chart toppers like, “Can’t Walk Away” and “Left Hand Side”.

Jamaican artist Conkarah is making his California debut at Island Reggae Festival with tunes sung in the soulful falsetto as on his originals “Remember the Days” and “Island Girl” and covers of other artists hits that have gone viral like Adele’s “Hello“ with Solomon Island recording artist Rosie Delmah. The artist’s videos have been watched to so often that his You Tube channel has over 100 million views.

Jamaica’s roots reggae band Raging Fyah make their first appearance at this year’s festival.  With three albums to their credit, and numerous tours throughout the US and Europe, the band is building a huge following. Their album Everlasting was nominated for a Grammy in the reggae category.

Pacific Island reggae music receives a great deal of attention both at traditional broadcast radio and online as those that have moved from their birthplace or those that represent the next generation maintain a strong cultural connection through music.  The term “island reggae” refers to artists from the Polynesian region and whose music has made it to the airwaves of the community worldwide.  Some of the most well-loved artists in the genre today will be at Island Reggae Festival in 2017 including Maui-grown Maoli who have rode the wave of success for over a decade with their rocking drum and bass lines, soulful harmonies and full band sound.  Born in the Phillipines, raised in Maui female artist Eli-Mac whose vocals soar on “Dubstop” is an American Idol finalist and  Samoan artist Sammielz comes to Island Reggae Fest from Sydney, Australia Sammielz who has a stack of hits to sing including “Let Us Be” and “Jah Boy” with Conkarah.

After presenting the festival for the first 3 years at Great America, in 2015 the organizers began hosting the event at the Santa Clara County Fairgrounds, a venue that allows for expanded space for an all-ages event that the entire family can enjoy and one that provides an appropriate concert setting to attract music lovers from varied backgrounds.  As event organizer Danny Perez notes, “In 2016 what stood out were the various ethnicities that were in attendance.  We are predominantly a Pacific Island crowd and to see to our demographic expand to include many different groups is great.  I’ve envisioned the Island Reggae Festival as an event that we as Polynesians can call our own but also as an avenue to expose our island culture and music to others.”

A family-friendly event, this year there will be free carnival rides and games for ages 13 and under.  The event will feature over thirty merchandise and food vendors with Polynesian food as well as some of the best in festival food favorites.

Returning in 2017 is the Youth Rugby 7’s Tournament.  Rugby is a popular sport in the South Pacific Islands. This year the tournament will invite youths from the ages 8 to 14 known as U8-U14 to participate.  The winners of each age group will be announced on the main stage and receive a hand-crafted Island Reggae Festival plaque inscribed with their team name.

The USO Car Club will host the USO Car Club Showcase.  For over a decade, this group has been led by CEO Kita Leao.  Mr. Leao is of Samoan descent and has instilled elements of the Samoan culture with his car club members.  The meaning of the word USO is “brother” in the Samoan language and this is the shared sentiment between all of the car club members.   The Car Club Showcase is  an opportunity to spotlight the lifestyle and interests of Polynesians in the United States.

The Island Dance Showcase will present dance groups and styles from various islands in the South Pacific including Samoa, Tonga, Hawaii, Tahiti, Fiji and New Zealand. The Tattoo Showcase will  be featuring some of the most popular Polynesian Tattoo artists who will be tattooing live at the festival and giving tutorials on traditional Polynesian tattoo patterns and what their symbols and origins derive from.

The 6th Annual Island Reggae Festival will also include a Diabetes Awareness initiative in partnership with Foothill Community Health Clinic. Onsite at IRF 2017, the clinic will be conducting free glucose screenings and giving away glucose readers, glucose strips and various toys. As to how these community-health oriented aspects of the festival come into play Danny Perez explains, “This festival is a platform we created to celebrate our Pacific Islander culture through music and dance.  We are also bringing awareness as to the diabetes epidemic our people face.”

Tickets are available on line through the Island Reggae Festival website or at regional ticket outlets in the Peninsula Area, San Francisco, North, East and South Bay, Sacramento, Stockton and Monterey areas.