~Two stages with live reggae, pop and R& B, music from around the Pacific Rim
& Jamaica.

~Over 30 merchandise and food vendors with Pacific Islands offerings and festival favorites.

Producer, Danny Perez stated, "That's what IRF is all about...to showcase our Island talent to the world. Fiji will be headlining and celebrating his new album, 'The Collection/50th State of Mind'  ~ 50 of his all-time hits that we all grew up on...and I am excited for everyone to get a chance to see Polynesian crooner David Rhythm, whose R&B flavor puts you in mind of Luther Vandross." 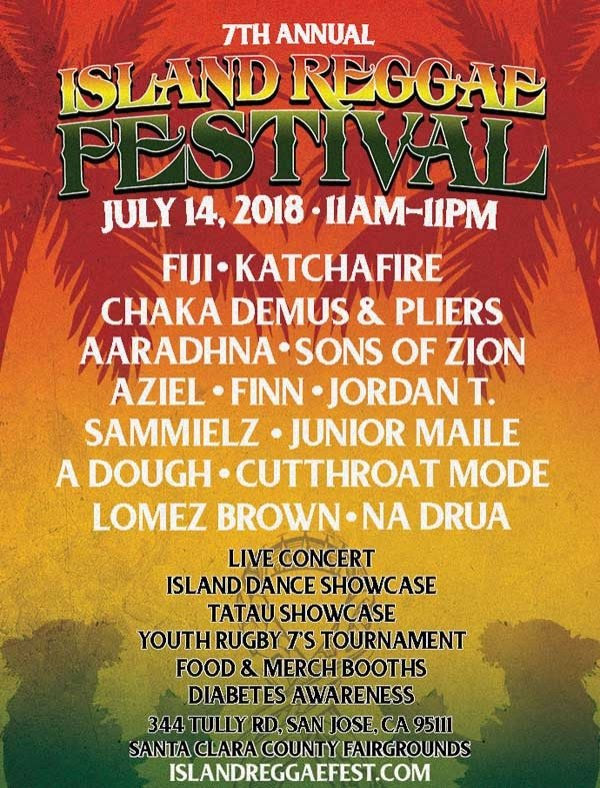 Fiji ~ His stage name reflects his cultural background and his golden voice has made him a pioneer of the Island Reggae sound as its most well-known artist paving the way for the careers of many others.

New Zealand’s Katchafire ~ An all-Maori reggae band whose sound is built on the foundation of classic roots reggae, with additional R&B, dancehall and funk influences that combine to present one of the greatest reggae shows on the scene today.

Chaka Demus & Pliers the Jamaican duo best known for the 1993 mega hit reggae dancehall song “Murder She Wrote” appear on the Island Reggae Fest stage for the first time in 2018.

Aaradhna, a female R&B influenced singer who hails from New Zealand and is of Samoan and Indian descent, has built a steady fanbase by writing and releasing soulful, personal songs since 2004.

Sons of Zion from New Zealand fuse Rock, Dub, R&B with Reggae into an eclectic mix.

Legendary S.F. Bay native of Samoan descent, Aziel will bring his R&B influenced sound with songs like “Fall In Love Again” from his album Take You Away.

Finn (born Haifine Latapu) aka Finn The Groovah's music is heavily influenced by R&B as heard on songs like his current single “Yeah Baby”.

Sammielz from Australia (born and raised in New Zealand) has a stack of hits to perform including “Let Us Be” and “Good Vibes.”

Junior Maile, has a unique vocal style that has its origins in the church where he began singing at the age of five! His R&B, soul and gospel vocal sound can be found in the one drop reggae song “When I’m Gone” with its uplifting lyrics, it has over 1 million plays on YouTube.

Cutthroat Mode is made up of three talented members, Rich Rollin with his rap delivery, Juice Boi with conscious lyrical content and Mr. Musik with his uptempo vibes.

With his cultural heritage centered in the Maori of New Zealand and the Cook Islands Lomez Brown mixes Reggae with HipHop and R&B to create feel good music with an island flavor.