Hundreds Turned Out For First Staging of Mobay 12 Sound Festival 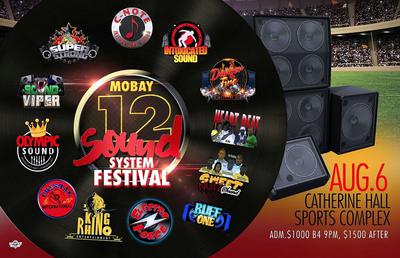 Hundreds Turned Out For First Staging of Mobay 12 Sound Festival

There should have been 12 of Montego Bay Sound System present, but Olympic Sound System was missing, information reaching us is that they had prior engagements.

Entering the venue was no hassle and security was on point as vehicles and patrons were searched, there was also ample parking available.

All eleven sound system that was booked for Mobay 12 Sound Festival were required to present three column (set of boxes), the boxes were used to form a mini lawn inside the stadium.

All systems were given ten minutes intervals to present their craft. Although all Sound Systems represented to the best of there ability, the surprise for the night came from the smallest system in the venue "Heart Beat Sound System. Heart Beat was only playing one-and-a-half column which was split into 3 half columns and they were not outplayed in Bass or clarity by the other sounds. Their (Heat Beat) selections were on point as they had the patrons rocking during all of their 10minutes sets.

One question I know you all are asking is which was the best playing system. In my honest opinion that has to go to Intoxicated Sound System. The sound was playing calm and mellow and easy to listen. They also had the best microphone stage of all the systems.

The heaviest playing bass sound was a toss-up between C-Note Sound, Electro Force and Super Strong Sound System. But from our observation, the heaviest bass should go to Super Strong. It (Super Strong) was also the loudest.

Although the Festival was not built as a clash, that did not stop the selectors representing for their sound system by playing high-quality dubplates. The oldest sound in the venue Electro Force (celebrating over 40 yeras in the business) with owner Boby Chemist, stamped their class as the sound playing the biggest dubplates in the venues which had the patrons in the almost full to capacity venue going wild. Biggest and best dubplate on the night was also played by Electro Force.

Best Juggling Sound Systems at Mobay 12 Sound Festival 2018. If we were to rank the sounds in best juggling order, again in our opinion:

We should also mention that there were some technical issues, Crystal Int'l was not able to play to its full potential as it was affected by low voltage and King Rhino had some of its equipment damaged not sure how or what caused that to happen.

The event was well supported by sound system operator from across Jamaica and few also flew in to be a part of this historical event.

Mobay 12 Sound Festival will now be an annual event presented by Sound Police.

Remember you can like Sound Police page on facebook for all information relating to Sound System around the world. Comments for Hundreds Turned Out For First Staging of Mobay 12 Sound Festival

Other related pages to Sound Systems