Known simply as "Ce'Cile", this Jamaican diva has consistently been tipped as the woman most likely to join Dancehall's men in the mainstream.

Style, wit, grace, intelligence, creativity and flare for controversy are all key components for a budding diva. Add a bit of sexiness, along with a large measure of talent and you've just defined the allure of Ce'Cile –Dancehall's "Bad Gyal". 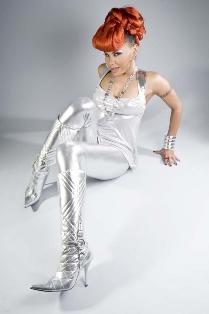 Already armed with raft of popular Jamaican singles, albums released in Japan and Europe, it's her much anticipated North American / Caribbean debut album "Waiting", (Danger Zone / SoBe Records) that is most likely to thrust her to international stardom.

From the beginning CeCile has been an innovator. This 'Bad Gyal' has kept tongues wagging since first breaking into the Dancehall scene with the self produced, shockingly refreshing and thought provoking smash "Changez" designed as a marketing ploy by poking fun at her male counterparts.

Not surprisingly, it won her a legion of female fans. Ce'Cile is a deadly combination of sex appeal with veracity and though dancehall for the most part is purely a testosterone-driven sphere, to miss Ce'Cile is to miss half the story.

She writes lyrics that other females shy away from for fear of being shunned in Jamaica's male dominated music scene.

Being the most outspoken, especially on issues concerning women, Ce'Cile has never felt trapped from expressing her stance as being bold, calculating and brutally honest in her lyrics and subject matter.

Her hit song "Give It To Me", (Coolie Dance rhythm driven) requesting reciprocal oral treatment (taboo in Jamaica) was demanding and in your face.

"Can You Do Di Wuk" a duet with Sean Paul featured on his Grammy winning multi - platinum selling album "Dutty Rock" was a testiment to her "badgyal" demeanor and the track became a natural pick for djs worldwide and made it possible for her to join Sean in Europe during his Dutty Rock tour for several shows including the Europe MTV Awards pre-party and Wembly Stadium in the UK.

On her album "Waiting", she delves into other topics such as "Faking" disclosing the fact that many women have to resort to that level in order to pacify their partner's inadequate performance.

"Talk Talk" playfully reveals the fact that many women are not above sampling their friend's goodies due to the information they confide about their man. "Worth It" is the ultimate "spend your money on me" tune, where she explains her "pro gold digging" stance.

These are just samples of her creative, controversial and fun subject matters. However, CeCile does not forget her roots, thus in addition to spitting on hardcore dancehall bangers, she also delivers on a number of groovy,roots reggae tracks.

Cecile and Chris Martin no longer together!

Cecile and Chris who dated for around four years and share a one year old daughter have separated. Despite the separation, Cecile prasied Chris Martin …

Bad Gyal CeCile Getting her Sexy Back After giving Birth!

The bad gyal of dancehall CeCile is now getting her sexy back after giving birth to a beautiful baby girl. The dancehall bad gyal recently post a few …

Bad Gyal Cecile Blasts Mc Nuffy Not rated yet
A battle of words is currently brewing between dancehall artiste Ce'Cile and comedian MC Nuffy. This follows a heated exchange between the two via social …

Ce'Cile to give more to her Fans  Not rated yet
RECORDING artiste Ce'Cile hopes to give fans more than they've become accustomed to in her latest album entitled Still Running. The 16-track set, the …

Cecile Put it Deh Lyrics Not rated yet
Hello..Yeah. Don't blame me blame yuh mother Yeah..hello What dem a say, what dem a say Bout dem house and no man nah go deh But from yuh good down …

CeCile launches Make a Change campaign in Africa Not rated yet
Jamaica's dancehall and reggae music sinjay CeCile has launched a campaign call "Make a Change" in Africa. It is a new music and multimedia campaign …

Cecile Cheater's Prayer counteraction Not rated yet
Cecile's counteraction to Chris Martin's Cheaters Prayer is steadily gaining popularity in Jamaica and overseas. Most of the females are really loving …

Cecile Anything Lyrics Not rated yet
Intro Boy, I?ll do anything as long as I?ve got you, na na na na, yeah. Anything, anything. Verse 1 Boy, I?ve got to tell you this, You got …