Toti dancehall , reggae and hiphop music artiste - Toti released his debut album entitled 'Well Bless' this year 2012 and it was wonderful from start to finish. I didn't have ot skip one song on there. 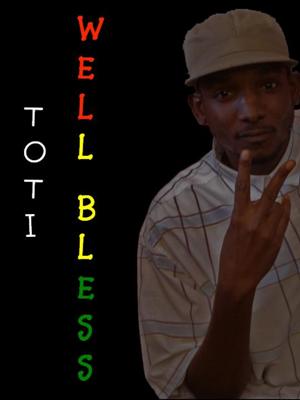 Julian Mitchel who later was given the name TOTI by friends who discovered his talent was a reference to the cartoon show ‘Teenage Mutant Ninja Turtles’. His friends felt that his lyrics were sharp like Leonard’s twin katanas plus hit firm like Donatello’s bo staff not to mention on Point like Raphael’s twin sais and were delivered quick and from every angle like Michelangelo’s Nunchaks.

Toti was born on the west coast of Saint Lucia in the West Indies in the village of Canaries. After migrating to the city of Castries many people and things began to influence this artiste but it was his everyday experiences, struggles and also other people’s struggles that continued to motivate him. Growing up many things continued to motivate him but it was people who made the greatest impact. People like his son Oasis, his peers, Lion (Jah Sounds), Reuben I, Bigg Lum, youths who share the same musical vision as he does and have a strong passion for positive music. He also recognizes artistes like the Notorious B.I.G., Sizzla, Buju Banton and many others.

Toti reminisces on his younger years entertaining his peers at elementary and high school during break and lunch time and during talent shows with his most memorable being at a school’s talent show, performing Shabba Ranks, ‘Bedroom Bully’.

Toti’s music is a mesh of Hip Hop, Reggae, Jazz and R & B. In a nutshell his music is basically consciousness and upliftment for the youths. This artiste does not include vulgarity or violence in his lyrics. He firmly states “If you don’t have anything positive to say. It’s best to just say nothing at all.”

With several performances under his belt including 2008 Youth Festival, Guinness Undisputed 09 even making it to the finals, also New Village Foundation ‘Stop the Violence and AIDS Awareness Workshop 08’ and several other community venues. Toti applies himself everywhere, occupying his time working hard, in the studio, with his son, family and in his true passion, performances. With music ever present in his heart and mind, Toti never believes that he should limit himself. He strives and aims to explore and nurture all his other powers at the same time always seizing all opportunities to get his voice heard because even the greatest artistes out there were once starving artistes. In his opinion a starving artiste makes better music than an artiste whose stomach is full.

With becoming a celebrity the last thing on his mind, Toti believes the focus should be placed on what he sings because this is what makes him who he is and creates a better overstanding of what he had to face to accomplish his goal of becoming an artiste. This young guru explains that “Everyone has to take a stand as a leader against war and violence because at the end of the day, it is we the people who face it directly. It’s our friends, brothers, children that are dying, our sisters and mothers that are getting raped. We are the victims of crime. So we need to speak out. We can’t change the world but we can make a difference”.

Being strictly a vocalist, Toti is a solo act enjoying the full attention of the crowd. He has a genuine love for all genres of music but reggae was what he grew up hearing so it was easy to be drawn to that sound hence why he wouldn’t change anything about his music. He uses music to express himself and speak about his life and this he believes is the only way to change his life, his struggles and situations that hinder progress in his life.

He writes everyday so his material is always fresh and up to date so his performances are always something to look forward to.
With his albums soon to be released on iTunes his music and videos can be seen and heard on the World Wide Web, Toti’s work can be experienced on Youtube, sound cloud and other social media sites. Finding him is as easy as typing “Toti St. Lucia” in any search engine including Google and Bing to name a few.

Rating
I love him
by: Amado

His music is so spiritual. This is a great artist. I would love to see him in concert here in Spain. I love you Toti.