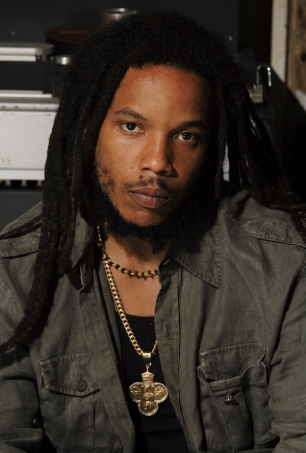 Stephen is the son of Rita and reggae legend Bob Marley.

He was a member of the reggae group called the Ziggy Marley & The Melody Makers, the other members were his siblings Ziggy, Cedella and Sharon Marley.

This singer, song-writer is also a producer, he has produced music for his brothers Damian and Julian Marley. In 2005 he produced Damain's album titled "Welcome to Jamrock" which won to Grammy Awards for BEST REGGAE ALBUM and BEST URBAN/ALTERNATIVE PERFORMANCE.

In 2003, Stephen and Damian put together an album called Educated Fools under the group name of Marley Boyz. They recorded it on labels Ghetto Youths International and Tuff Gong International, collaborating with a number of other reggae artists including their brother Ky-Mani Marley.

He is a five-time Grammy award winner as an artist, producer, and member of Ziggy Marley & The Melody Makers.

Stephen was born in Wilmington, Delaware, and raised in Kingston, Jamaica. He currently lives in Miami, Florida, where he has a home and a private recording studio.

His sons Yohan Marley and Joseph "Jo Mersa" Marley, are also a musicians.
In 1979, a seven year old Stephen started his musical career as part of the child band the Melody Makers alongside older siblings Ziggy, Sharon and Cedella.

The Melody Makers recorded the song "Children Playing in the Streets" written by their father Bob Marley. Stephen and older brother Ziggy- Bob Marley's two oldest sons- were directly mentored into music by their father and performed alongside
Bob Marley and the Wailers at the 1978 One Love Peace concert in Kingston, Jamaica, 1979 Reggae Sunsplash in Montego Bay and at Zimbabwe's independence celebrations in Salisbury, Rhodesia (Harare, Zimbabwe) in 1980.

After their father passed on, Ziggy and Stephen performed alongside the Wailers and the I Threes at Bob Marley's funeral on May 21 1981. The Melody Makers continued with Ziggy taking over as the group's leader, composing songs such as "What a Plot" in 1982, as well as "Lying in Bed" and "I Met Her on a Rainy Day" in 1984. In 1985, the group released their first album, Play the Game Right. It was with the release of the third album, Conscious Party that the group found international fame.

Released on April 5 1988, 15 days before Stephen's 16th birthday, Conscious Party made Ziggy an international star. Ziggy wrote all the songs on the album and performed the lead, ably backed by sisters Sharon, Cedella and brother Stephen- who co-wrote and performed the lead vocals on the song "A Who a Say." The album went platinum in the United States, and the Melody Makers would become the youngest recipients of the Grammy for Best Reggae album for Conscious Party.

The follow up album "One Bright Day" released in 1989 featured the hit "Look Who's Dancing" written by Ziggy and Stephen. Just 17 at the time, Stephen shared the lead vocals with his big brother and performed dancehall toasting on the song, which also featured energetic backing female vocals by Sharon, Cedella and Erica. Stephen earned the nickname "Raggamuffin" or "Ragga" as he was the first Marley to engage in dancehall rap/deejaying.

Steady Billboard Second For Stephen Marley Not rated yet
Collections of rockers have risen and fallen on Billboard's listing of top reggae full-length projects, but Stephen Marley's Revelation Part II: The Fruit …

Stephen Marley Calls in Rick Ross, Waka Flocka and Busta Rhymes on his new Project. Not rated yet
Multiple Grammy-winning reggae artist Stephen Marley is set to release his new project Revelation Part II: The Fruit of Life on July 22. This project, …

Stephen Marley third album Revelation part 1 Not rated yet
Grammy award winning singer-songwriter, Stephen Marley, is set to release his third solo project, Revelation Part 1, The Root of Life on May 24. The …