Sly Dunbar is a drummer, best known as one half of the prolific Jamaican rhythm section and reggae production duo Sly and Robbie

He began playing at 15 in a band called The Yardbrooms. His first appearance on a recording was on the Dave and Ansell Collins album Double Barrel. Dunbar joined a band Ansell Collins called Skin, Flesh and Bones. 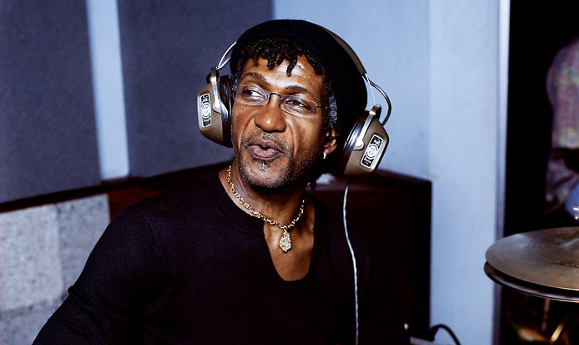 Speaking on his influences, Sly explains “My mentor was the drummer for The Skatalites, Lloyd Knibb. And I used to listen a lot to the drummer for Booker T. & the M.G.'s, Al Jackson Jr., and a lot of Philadelphia. And there are other drummers in Jamaica, like Santa and Carly from The Wailers Band, Winston Bennett, Paul Douglas, Mikey Boo. I respect all these drummers and have learnt a lot from them. From them, I listened and created my own style. They played some things I copied, other things I recreated.

In 1972 he met and became friends with Robbie Shakespeare, who was then bass guitarist for the Hippy Boys. Shakespeare recommended Dunbar to Bunny Lee as a possible session drummer for the Aggrovators.

Dunbar and Shakespeare decided to continue performing together. They worked with Peter Tosh and his band until 1979, recording five albums.

Dunbar played for the Aggrovators for Bunny Lee, the Upsetters for Lee Perry, the Revolutionaries for Joseph Hoo Kim, and recorded for Barry O'Hare in the 1990s.

Sly and Robbie also played on Bob Dylan's albums Infidels and Empire Burlesque (using recordings from the Infidels sessions). Other sessions include their appearance on three Grace Jones albums, and work with Herbie Hancock, Joe Cocker, Serge Gainsbourg and the Rolling Stones.

In 2008 Dunbar collaborated with Larry McDonald, the Jamaican percussionist, on his debut album Drumquestra.

Dunbar appeared in the 2011 documentary “Reggae Got Soul: The Story of Toots and the Maytals” which was featured on BBC and described as “The untold story of one of the most influential artists ever to come out of Jamaica”.

In 1979, Brian Eno remarked of Sly  " (...) So when you buy a reggae record, there's a 90 percent chance the drummer is Dunbar. You get the impression that he is chained to a studio seat somewhere in Jamaica, but in fact what happens is that his drum tracks are so interesting, they get used again and again."

Return to Dancehall and Reggae Music Homepage from here