Reggae music singer J Boog, The singer of Samoan descent was born in Long Beach and raised in Compton, California.

Growing up in the rough streets of Compton, the strong sense of tradition and culture that he absorbed from his family was instrumental in his path to stay off the streets and begin a successful music career. 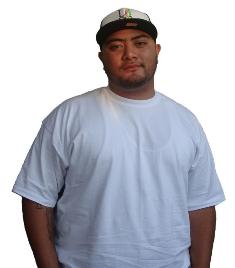 At the age of four, after hearing his older sister playing the piano, he developed an interest and started watching her and learning about music.

Soon, J was singing along to the notes & melodies he heard his sister play. A while later, she brought home a Bob Marley song book.

Even at this young age, J knew Bob's name and his music. Upon hearing his sister begin to play, something clicked inside J.

His music career became serious in 2005, when a couple of brothers from his neighborhood brought him to one of J's favorite artists, George "Fiji" Veikoso". The two began working together immediately and J ended up moving to Hawaii in 2006 to continue developing his craft.

After releasing his debut album "Hear Me Roar" in 2007, he joined the musical family Wash House Music Inc, a record label based in Hawaii and San Francisco.

In 2008, he met Gramps Morgan of Morgan Heritage and there was an instant chemistry. Gramps was keen on working with J, and set out to make a way. Shortly after, Gramps, he and other Wash House family members were in Jamaica recording in such prestigious places as Bob Marley's "Tuff Gong" Studio, Don Corleone's "Hit Maker", Bobby Digital's "Digital B", Shaggy's "Big Yard", Sugar Minott's "Youth Man Promotion" and more. The results are apparent when listening to Boog's new music.

It's easy to see why he has been winning over fans when you meet him. He has the right spirit and attitude to carry him to the next level. His new album, "Backyard Boogie" is slated for release September 27th 2011 and features Tarrus Riley, Jacob Hemphill (of SOJA), Peetah Morgan (of Morgan Heritage), Fiji and others. Leading up to the release of his official new album, J Boog released the "J Boog EP" on June 14th 2011 via Wash House Hawaii/EMPIRE Distribution. The EP featured five brand new songs, along with three previously released songs, including his smash hits "Let's Do It Again" and "So Far Gone".

2. Got To Be Strong feat. Richie Spice

J Boog - Let Me Love You Lyrics
See so many girls coming my way But a you me mind deh pon baby Come mek me tell dat to mommy Hear weh di J Boog a say..hea All we need is one night …