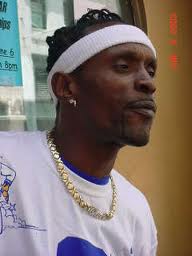 He was called the dance master because he could create dances without much effort.

Some of the dances which are credited to him are:

One of his most popular dance was willie Bounce, this dance was done in honor of his fellow crew member Willie Haggart.

Bogle who was now at the peak of his career as he was now a recording artiste was killed on January 20, 2005.

Reports are that he and four friends was travelling in his F150 truck after leaving a party when they stop at a gas station.

Two men on bike rode up and fired a number of shots into his truck. He was rush to hospital but was pronounced dead on arrival.

The dancehall reggae world has lost an Icon.

May his soul rest in peace.

More about on the life of Dancehall Reggae Dancer Bogle

Gerald Levy was born on 22 August 1964 in Trenchtown, West Kingston in the capital of Jamaica. He was educated at Charlie Smith All Age and spent a brief period at St George's College.

As a child in the 1970s he appeared on Louise Bennett's television show Ring Ding and in the 1980s he danced on the Saturday evening television programme Where It's At, both on the Jamaican Broadcasting Corporation.

Bogle was called the "Dancehall Master" and was best known for his dancing. He had the ability to seemingly create dances without effort and his dances would become extremely popular.

In the 1990s, Levy created the Bogle dance, the scene's first crossover dance move. He was also a major influence on breakout artists such as Elephant Man and Beenie Man, who gave shout-outs to Levy in songs like "Row Like a Boat": "Seh Mr. Bogle have di brand new style/Come get di style, come get di style."