Dancehall reggae artiste Keera Rootz sweet rub a dub - "When music is a part of you, there's nothing you can do but share it," so says Keera Rootz who describes herself as "eclectic." 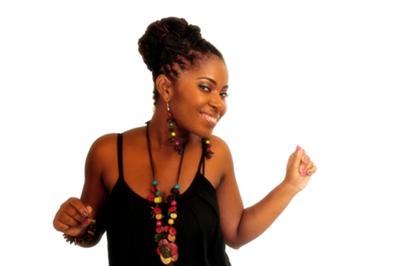 From the Kleva Roots Family Production label, the upcoming Roots/Reggae artiste believes message must be in the music and despite her desire to be trendy and appreciated by teenagers and young adults especially in Jamaica, she is adamant about keeping the authenticity of Reggae in her songs.

Keera released a single, entitled "Sweet Rub-A-Dub" on a compilation album that also features tracks by stablemate Asante Amen as well as Little Hero, Determine and Teflon to name a few.

The song she says "comes from the heart" and is a comparison between her love for music and love for a spouse.

Keera Rootz always knew she could sing but the thought of entertaining an audience had never crossed her mind until she braved the unthinkable, “her first performance”.

It was the year 2008 and as she waited, it was as if she just stopped thinking, becoming almost oblivious to what was happening around her.

Performance anxiety had just begun to get the best of her when the MC introduced her and in that instant, while making her entry, Keera Rootz came to life.

The performance lasted for about 15 minutes and went very well and Keera felt herself exhale, thinking to herself that she could continue doing this, ‘forever.’

She went through her routine basking in the positive response, satisfaction and appreciation of the audience; that mostly comprised of co-workers, managers and well wishers from her job, extended to her through cheers and the request for an encore.

'It felt great' she remembered as the performance seemed to end as quickly as it started.

The following day Keera was still receiving congratulations from her friends, colleagues and other patrons , who had attended the corporate party she performed at, who were still in awe at how well she had done.

One of the calls she received was from the manager of the group L.U.S.T., who had also performed at the event. He told her that a well known local producer was interested in meeting her based on his report of her performance.

Unknown to her then, the producer was Fattis Burell, known for breaking international artistes such as Sizzla, Luciano and Capleton.

Keera remembered her first studio session with Fattis, “just sing” he said as he recorded her. She recorded a few singles for him, which was not released before moving on.

Since then Keera has matured, she has come to that place within her where she is able to “just relax and be creative”. The end product has been satisfactory thus far and marks for her the beginning of a new life of, ‘being in love with music’.

Sweet Rub-A-Dub expresses just that as Keera Rootz' clear crisp vocals belts out the lyrics, “You’re the first thing on my mind when I wake up in the morning" on the track.

Her vocals are melodious, strong and harmonious. Keera Rootz, a promising new entrant to the Reggae music industry.