With the release of his landmark CD "Where There Is Life" in 1995,

Luciano emerged as one of the most important reggae singers in decades and the greatest hope for roots reggae's survival in the digital dancehall era. 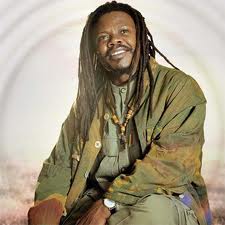 Since that much acclaimed release, Luciano's music has been consistently praised for imparting sentiments of spiritual salvation, Rastafarian edification and African repatriation.

In these troubled times, Luciano's engaging baritone resonates like a divinely ordained instrument possessing the power to comfort and, seemingly, the informed biblical authority to warn of impending destruction.

While many of his so called "conscious" contemporaries have faltered by recording songs that glorify wanton sex and random violence as a means of topping the charts, he has held steadfast to enriching Rasta principles; these positive lyrical themes have justifiably earned him the title of The Messenger. However, the humble singer also refers to himself as the child of a king which is the title of his latest CD on VP Records.

"We are all children of the Most High God and as a Rastaman, I acknowledge that I am a child of Emperor Hailie Selassie I because all of his teachings are in my songs," he explains. "I am a child of king and I just want my family and my fans to receive the blessings that God has given through me as a messenger and an instrument of peace."

Produced by Byron Murray of Kingston's In the Streetz Productions, "Child of a King" is one of The Messenger's most esteemed works, mixing classic cover versions and original tunes, recent hits and brand new boom shots. Luciano estimates this to be his 40th album; the prolific artist releases three (full length) CDs per year. "I have so much music and messages, that I cannot be holding it inside of me," he declares.

"From a management point of view, they would like to see me cooling it out for a while but if a bird doesn't sing, tell me if that bird is happy? Right now we are at a point of rivalry and all matter of evil in the world and my duty as a messenger is to run the music out there like the River Jordan."

Music has run deeply throughout Luciano's life. Born Jepther Washington McClymont on October 20, 1964 in Davey Town, a small community located atop a hilly region on the road to Mandeville in the central Jamaican parish of Manchester. He was raised in the Adventist church and sang in the church choir.

His father Arthur passed away when he was just 11 years old. He left behind a guitar he had built and as Luciano recalls, "through those early years, I fell in love with the guitar and started to learn to play, which I realized was showing love and respect to my father." His beloved mother Sophie, who struggled to raise Luciano and his eight siblings, is also a gifted singer.

As he grew older, Luciano sang in local youth clubs and took the mic at local sound system dances.

In the late 80s, he arrived in Jamaica's bustling capital Kingston hoping to transform his musical talent into a flourishing career. He sold oranges in the marketplace as means of initially supporting himself but when a drought restricted that year's orange crop, he returned to Mandeville.

However, the music beckoned so it wasn't long before he went back to Kingston, this time with even greater determination to succeed. He worked as an upholsterer by day and at night he sought recording opportunities in various studios.

It was suggested by one of his mentors, Homer Harris, that the name Jepther McClymont did not have the requisite charisma to propel the career of an aspiring entertainer; Jepther was (professionally) re-christened as Luciano, a name that parallels his extraordinary vocal skills alongside those of the world-renowned operatic tenor Luciano Pavarotti.

The name was also somewhat prophetic: "Luci" means bearer of light and within a few years Luciano would shine as one of the brightest lights in the Jamaican music constellation.

As the 1990s progressed, Luciano recorded for a few producers but failed to make any significant headway until he met Freddie McGregor. "Shake It Up" (a cover version of Cheryl Lyn's RnB hit) recorded for Freddie's Big Ship label became a number one hit in the UK in 1993 and was featured on Luciano's first release for VP Records "After All".

But due to Freddie's hectic touring commitments, he was unable to devote sufficient time to developing his singer/songwriting skills. However the singer soon found an ideal collaborator in producer Phillip "Fatis" Burell of Xterminator Records whose releases were characterized by Rastafari imbued themes and intricately crafted roots rock riddims played by some of Jamaica's finest musicians.

Philip Fatis Burrell who also took on the managerial role in Luciano's career, brought the gifted singer's talents to the musical forefront on cuts like "Poor and Simple", "Chant Out" and "One Way Ticket", the latter regarded as one of the finest repatriation anthems ever written and a song that continually summons enthusiastic responses in Luciano's breathtaking live performances.

With the release of "Where There Is Life" for Island Jamaica/Xterminator, his deeply devotional yet accessible lyrics and the beautiful melodies of "Its Me Again Jah", "Your World and Mine" and "Lord Give Me Strength" coupled with Fatis' contemporary one drop riddims catapulted the singer to the top of the reggae charts, toppling (at least temporarily) the decade long reign of deejays rapping x-rated lyrics over digitized dancehall beats.

Luciano and Fatis (alongside preeminent musicians such as saxophonist Dean Frasier and drummer Sly Dunbar) created several exceptional releases including 1997's "The Messenger" and 1999's "Sweep Over My Soul".

Although they parted ways in 1999 due to artistic differences within the Xterminator camp, Luciano consistently acknowledges Fatis' essential role in establishing the foundation for his far-reaching success.

The Messenger has since ascended to even greater musical heights with "A New Day" (2001) "Serve Jah" (2003), "Serious Times" (2004), all for VP Records, and his latest effort, Child of A King", the crowning glory of his exalted career thus far.

The set opens with the acoustic "Remember When" as Luciano reflects on ancient kingdoms of Africa and the inherited regal identity that is present in all of us. Heads of government are chided for their war mongering on "Watch What You're Doing" and "This One's For The Leaders" recorded on Don Corleone's massive Drop Leaf riddim.

He confronts a deceiving lover on "Can't Take No More", cautions against the fleeting gratification of materialism on "Silver and Gold" (voiced on Steven "Gibbo" Gibbs' Hard Times riddim) and sternly warns gun men to turn their lives around on "Brother Man":"Mr. man rinsing your steel, taking another life how do you feel?/One day I know your time will come, better take this word of advice and put down your gun."

Reggae singer Luciano will be reapplying for his US work permit next month, and he remains confident that it will be reinstated given the legal advice …

An article post on myjoyonline.com is saying that reggae music singer Luciano was pelted with empty water bottles at the Nigerian Carnival. The news …

Reggae Superstar Luciano Son Menelik Stabbed and Killed. Not rated yet
Reggae superstar Luciano is now mourning the lost of his son Menelik. According to reports he was stabbed on February 28th, 2016 during an altercation …

Luciano - If God Was Like Man Not rated yet
As a part of their 15th anniversary celebration, Riddim Wise is proud to present this new single featuring the legendary Luciano "The Messenjah". "If …

In The Name Of Love, brand new song from Luciano Not rated yet
Please download on button below the new single by international reggae artist Luciano. The track entitled “In the Name Of Love” comes with a reggae …

Reggae artiste Luciano says the Younger artiste music lock Positive Lyrical Content Not rated yet
The self-professed 'Messenger of Reggae,' Luciano has a big issue with the current state of Jamaican music, taking aim at younger artistes for what he …

Luciano said his Identity was Stolen Not rated yet
The reggae music singer said he has not been to the United States for more than a year because his identity was stolen. In an interview post on the …