Dancehall artist Minaj, birth name Onika Maraj, was born on December 8, 1984 in Trinidad and Tobago. At the age of five (5) she moved to Queens New York where she lived with her Family.

Nicki started her musical career in 2004 creating mix-tapes. This led to her being awarded with Female artist of the year at the Underground Music Awards. 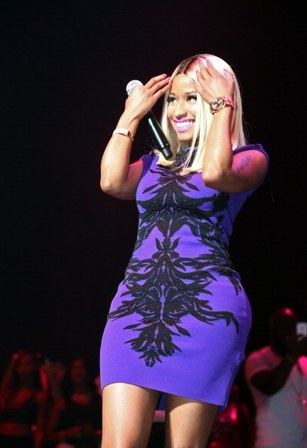 Her single titled "Your Love" is what propelled her to the top. It was remixed with various artists, such as Chris Brown and Jay Sean.

Although she's is a Hip Hop and Pop singer, recently (2010) she has done some collaborations with some of reggae and dancehall music hottest artists.

She collabs with Gyptian's on this summer chart topper "Hold You" and Sean Kingston's "Dutty Love". Both songs were monster hits in Jamaica, USA andEurope.

There were also some controversy regarding the Video for "DUTTY lOVE". Most music lovers consider Minaj as the Barbie of Hip hop music, because of her style of dressing.

The video was shot in Jamaica and it's reported that Sean asked the Barbie for dancehall and reggae music to appear in the video.

When the video was officially released the Barbie for dancehall and reggae was cut from the film and it was speculated that Nicki had asked for this to be done.

Even though her music career was started in 2004, her first single was not released until April 2010, it was titled "Massive Attack".

As per Rick Ross "She's One of the Greatest".