Chi ching ching Born Radion Tashaman Beckford on 19th September 1982 in St Mary, Jamaica to Herbert Beckford and Kathleen Edie, he was raised by his father in New Kingston, where he also attended school. 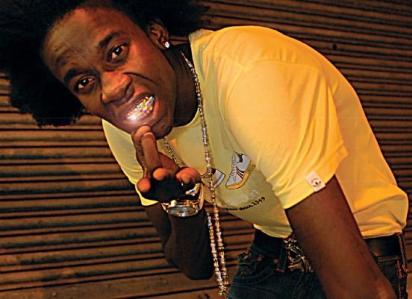 As an Adolescent he was not too popular with the ladies, “I was very lanky and poor, Girls were interested in the boys who had money and wore expensive clothes and bag''.

He found his escapism through music and his solace in dancing, at the end of the school day he would enjoy nothing more than to go home, put on the radio and dance. Artists like Buju Banton , Bounty Killer, Beenie Man who inspired his love for music.

His passion of music opened up imaginable possibilities for great accomplishments as an entertainer and one day becoming a household name. In 2003 the family moved to Golden Spring, St Andrew and he set about making those dreams a reality. LIGHTS,CAMERA,ACTION,CUT.... With Dancehall’s pop culture of video-recorded Street Dances, the world took notice of Jamaican residential party nights.

DVDs of Dances such as Early Mondays, Passa Passa, Weddy Weddy, Dutty Fridaze and Hot Monday became the homing ground for newcomers to showcase their talent and potentially become the most sort-after Dancehall Entertainer.

CHI CHING CHING soon became a popular face and at that time was more familiarly known as All Star. His unique way of standing out soon made patrons and most importantly videographers pay attention and Chi Ching Ching was among others, highlighted as the main feature of these Street Dances. “I would come to the Dance with mi carpet and roll it out and Dance.’’ The name CHI-CHING-CHING was born when he started creating slangs mostly comical and very catchy.

Children started adopted those slangs and everywhere he went the children in the communities would be like chi ching ching. My Shoes Are Pointing In Many Different Directions... There is no set rule in Entertainment, no boundaries and Chi Ching Ching soon set his talents on other musical journeys. He began work with Big League Productions and voiced the hit song, “Lock Pon Di Ting’’. Credible artists took note and soon requested collaborations with the witted tongue entertainer.

His collaborations with Beenie Man, Elephant Man, Bling Dawg and Tony Matterhorn initiated the catalyst needed to start work on his debut album, a goal soon in the finishing stages of completion. His second release, ‘Popcorn Pop’, has also been well received and he is currently working on the video for it. 2008 has been a busy year for Chi Ching Ching, with his talents crossing the Atlantic to the UK and shows in Canada, USA and most of the Caribbean islands, he has many shows scheduled over the coming year in both Japan and Europe.

He has also received many trophi ranging from ‘Best Entertainer’ to ‘Outstanding Contribution in Dancehall’, “I love the fact that I am recognised, i always wanted to make something of myself and i can say carrying the red carpet has finally paid off . from nothing to something.’’ More recently, he has become the face of Magnum Tonic Wine on a huge island-wide promotional tour in Jamaica. Giving magnum the slang CRICK CRICK CRICK every time i pop ah magnum cap i hear CRICK CRICK CRICK Everyday We Party. He is without doubt the result of a success story that many authors write about in fiction, yet still gives those who have dreams a hope that they may come true.

He has achieved when many has said he would not, has changed the thinking of many disbelievers and continues to work hard to not be catergorized by one thing, he is all things entertainment, an artist in all sense of the word.

The Dancehall has been the focal point for Chi Ching Ching’s successful career and it is here that you can see and hear him in all his entirety taking the mic and aerating the dance with lyrics like “Chi Ching Ching”, “It Ain’t No Knife And Fork And Kitchen Ting Ah Diamond And Pearls And Richin’ Ting’’, “Hennessey Gets Me Out Of Any Situation”, “Everyday”, and “The Cut”, which he always ends along with his distinctive image of jewelled encrusted grills an extensive and exaggerated CHHHIIIINNNGGGG!!!

Chi Ching Ching proud to sing 'Breadfruit'... Full Story About the Breadfruit Song Not rated yet
It is said that behind every hit song is a great story, and it is no different for Ch Ching Ching's 'Breadfruit'. The deejay's song Breadfruit is …

Chi Ching Ching One Knock official video Not rated yet
The king of dancehall and reggae music slangs Chi Ching video for his single "One Knock". watch video below... READ MORE ABOUT CHI CHING CHING …