Glendon Bailey known as Admiral Bailey born and grew up in the Kingston 12 ghetto of Waterhouse. One of Jamaica’s primary and most significant DJs to materialize from the modern day raggamuffin era of reggae music.

He began his DJ career for the legendary King Jammys and was also an artist on the sound system of the same name. 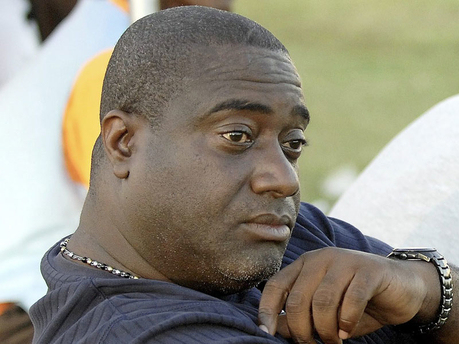 As Jammys was one of the leading Producers in the 1980’s with his new digital rhythms, it was inevitable that Admiral Bailey would attract a great deal of attention. His first calobrations such as "One Scotch" (with Chaka Demus) and "Ballot Box" (with Josey Wales) were minor hits, then "Politician" was extremely popular.

It was the release of his tune "Punany" that shot him into a major league dancehall celebrity. This tune was a massive hit despite not being played on the radio due to its offensive lyrics. He then re-recorded a version called "Healthy Body" that was approved for airplay. "Punany" paved the way for the bashment style reggae that was to dominate the dancehalls and sound systems worldwide in the near future.

After this, he could literally do no wrong. His subsequent singles - "Big Belly Man", "Kill them With It", "No Way No Better than Yard", "Horse Tonic", "Think Me Did Done" and "Jump Up" all went straight to the top of the charts which made him an established and very credible Reggae Artist. All his big tunes were produced by King Jammys, who released an album "Kill them with it" (Live and Love) to capitalise on the success of the 45s.

In the 1990s he became known as a "clean" deejay, eschewing the slackness of many of his contemporaries. He recorded with Byron Lee on some of the latter's big soca hits, and even starred in television commercials for banks.

When the Jammys studio rose back to prominence in 1998/99 with the success of Ward 21, Bailey was ready to make his come back. He had well-merited success with tunes like "Ganja Spliff", "What Time Is It", "Work With It", "Mouth Clean", "Bashy Bashy" and "Nuh Dash Weh Yuh Pickney". He remains an incredible performer and master DJ, an artist who has made a universal impact and is respected and appreciated to this day.

Veteran Dancehall artiste Admiral Bailey slapped with fraud charges Not rated yet
KINGSTON, Jamaica – Entertainer Glendon ‘Admiral’ Bailey was on Monday slapped with several fraud-related charges. Reports are that about 10:30 am, …

Admiral Bailey Jump Up lyrics Not rated yet
Admiral Bailey..Yes sir You have pleaded guilty to the charge of disturbing the peace Now tell the court exactly what you said Jump up, jump up everyboday …