UB40 is a British reggae group which was founded in 1978 in Birmingham England (UK).

This band/Group is considered to be one of the most successful reggae group out of Europe. 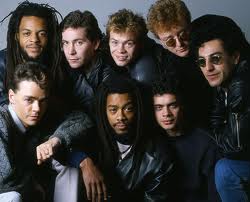 The Birth of the Band has been credited to founding members Ali Campbell who was the lead singer at the inceptionand Brian Travers. They were the the ones who walked the street of Birmingham promoting the band.

The early band members who were mostly schoolmate came together and after a lot of practice and rehearsal got their first gig in February 1979 at the "Hare and Hounds Pub" located in their home town Birmingham.

I remember when I was growing in Jamaica in the 1980's, our people usually talk about "UB40". Now the song that readily come to my mind is "Red Red Wine".

Special mention should also made about former members Ali Campbell, Michael Virtue, Patrick Tenyue and Henry Tenyue for there contribution to this top Reggae Band. The group's first single was "King/Food for Thought" which peak at number #4 on the UK Chart.

Their first album titled "Signing Off" was released on August 29th 1980 and this album peak at number #2 on the UK Album Chart and has since sold Platinum.

Top record Label such as Virgin Records and A&M Records have done recording for these legend. Their genres of music are Reggae, Reggae Fusion and Dub.

Their international success came through charts toppers such as "Red Red Wine", "Can't Help Falling In Love", "Kingston Town" and "I Got You Babe". More information available here.. They have basically tour the entire world from dancehall and Reggae land Jamaica, North and South America, Europe amongst other places.

Dancehall Reggae World without a doubt has given the status of Legend of reggae and dancehall to this Group/Band.

UB40 Name showdown looms Not rated yet
WHAT'S in a name? A lot for reggae band UB40. The musicians look set for a showdown over the use of the name after former band members announced they …