For Janice Fyffe a.k.a. Lady G, the road has not always been easy but she is one determined lady who has proven that hard work in the end will always pay off. 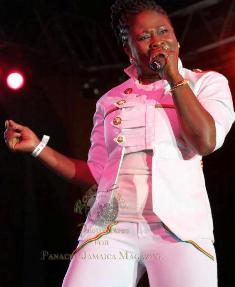 It all started eighteen years ago, armed with talent and a whole lot of dreams she decided she was going to make her markin the music arena but “on her terms”.

She came on the scene when such artistes as Shelly Thunder, Sister

Nancy and Sister Charmaine were “tearing the dancehall apart”. Although she yearned to make her mark too,She decided that slackness would not be the vehicle that took her there. Born in Spanish Town, St. Catherine, she attended St. Joseph High and Dunoon technical Schools. Her love of music was so strong that she used to sneak out through back doors to travel around thecountry with the Black Scorpio Sound Systems!

According to her escapades weren’t wasted as they taught her valuable life’s lesson. After leaving high school she soon met Denzil “Sassafras” Naar who noticed her talent and decided to take charge of her career. Things couldn’t have been better as he was working with top DJ Papa San. Before long she was making a name for herself all over Jamaica. Although she recorded several singles it wasn’t until she voiced “Nuff Respect” that she set tongues wagging. For a while this was the anthem of every woman who demanded to be treated with respect. She soon followed this up with other hits such as "Legal Rights” and “Round Table Talk” both in combination with Papa San. Apart from placing her with the rest of the top DJs these songs also earned her DJ of the Year both in the United States and Canada. After copping those awards Lady G seemed to be attracting more like a moth to a flame.

She copped the DJ of the year award in 1988, 89, 90, 91, 94 and 98 from Award bodies such as martins, Tamika, Rockers, Jamaica Federation of Musician (JFM), Binns and the Canadian Reggae Music Awards. She also received a ‘Best Video Award” for “Round Table Talk” done with Papa San. Lady G had a lot of tongue wagging in 1987 when she showed just what she was made of as she went four-the-hard-way with Lady Junie, Sister Charmaine and Junie Ranks. It was a performance to behold as Lady G stood her ground and showed that she was up to any challenge-with the support of her adoring fans. Fame has its price and for Lady G it was too much time away from her young family. She took a break from the music scene to add to her family.

During her absence off the scene the dancehall culture became even wider spread and with it came a burst of fresh female talents such as Angie Angel, Princess S, Lady Mackerel, Queen Paula and Lady Saw. On her return to the entertainment scene she joined force with Dannie Brownie on Main Street Records and began recording on his label. It was hard work and a lot of creative marketing from the Mainstreet camp. Lady G flowed right back into the musical rhythm releasing such hits as ‘Rock Back”, “Me or the Gun”, “Good Man Short”, “One Man Alone”, “Perform” and “Thank You” done in tandem with Chevelle Franklyn. Incidentally “Thank You” a track from her album ‘God Daughter’ recorded on the Exterminator label was a big hit for Lady G as it sat a top several Caribbean charts. 1998 saw the release of another album for Lady G titled ‘Nuff Respect’.

Unfortunately lack of proper promotion prevented it from impacting on the market the way it should. However, the remix of ‘Nuff Respect’ more than made up for it as the song enjoyed extensive airplay.

In 2000 she G did a combination with Crissy D titled “Girls Like Us” which entered the British Charts at #5.The busy DJ went on to do other successful singles such as “Man A Man”, “Perform” and “Breeze Off”. With her popularity came tours to Europe, United States, Japan, Switzerland, England, Germany and the Caribbean. Two years ago Lady G took charge of her own career with the formation of her production company G-String. It started off with a bang as the first Greensleeves distributed riddim Belly Skin with top artistes such as Sizzla, Capleton, and Ce’Cile. She then followed that up with VP distributed riddim Flava which she produced which was a hit, attracting such artistes Macka Diamond, Lady Saw and Sizzla.

Among her recent releases are “Girls Know What Guys Want”, “Enough”, “Talk To We” (With Macka Diamond) on the 2004 Degree riddim, “Hungry Child”, “Can’t Live Like We” on the Gold Mine riddim and “Nah Go Dung” on the Scoobay riddim.

Lady G Has The World Smiling Not rated yet
It was an eventful summer for dancehall’s foundation artist, Lady G! It all started in Toronto, Canada where she was recognized at the 4th Annual ReggaeXclusive …

Lady G 'SMILE' The EP Prod. by Indie Roots Records Not rated yet
Nuff Love and respect to Vincent 'Pancho' Wright for all of his involvement in this Album from beginning to end. Big up to Bobby Pottinger,Brian Kotler …

Lady G Ready To Prove Foundation Is Here To Stay With Upcoming Video Release Not rated yet
Kingston, Jamaica Lady G is one of the most respected female Dancehall acts in the industry. Her songs “Nuff Respect” and “Ease Off, Breeze Off” …

Dancehall artiste Lady G has New Album, New Music and a New focus on Life Not rated yet
With a new album due out this summer and new songs out including collaborations with reggae-music icon Marcia Griffiths, deejay Lady G is optimistic about …

Lady G is Back with a BANG!!!!! Not rated yet
AFTER a brief hiatus, veteran female deejay Lady G is back in the studios. The artiste, whose real name is Janice Fyffe, has released singles Herbie, …