To all in the Ghanaian Dancehall and music circuit he is known as Stonebwoy Burniton.

Outdoored Livingstone E. Satekla, he hails from the Volta region of Ghana as the 4th child of 7 siblings born on saturday 5 March 1988. 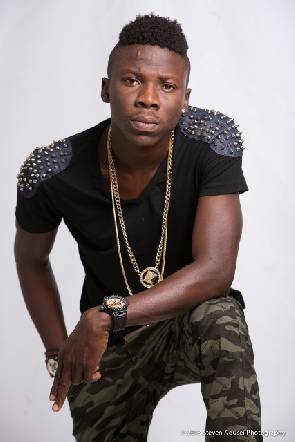 He realized his talents and abilities as a lyricist and script writer at an early age, remembering writing and acting drama pieces as far back as fourth year in primary school.

Since then he has never stopped singing both songs that he has written and composed and those by artists he is influenced by.

He was introduced to recording his own track nearly a decade ago with a small recording set up that a family member had. Before and till date, he has spent most of his time composing.

In his first year at Senior High School, he was introduced to a radio DJ/presenter at Adom FM in Tema who at the time was the host of the KASAHARI show.

On this show, upcoming artists would have battles every Saturday night and that is where he came into contact with artists such as Sarkodie, even though they both attended the same Senior High. He said proudly “I battled my way out every weekend without defeat till date”.

He released his first radio track “Makuma” (My Heart) in his second year at Senior High School and several others later that same year. By his third year, he had acquired himself a stable underground popularity and was thereby able to release another titled “Empress” which held him up even after leaving school in 2007.

After that, things have happened in quick succession and he started work with S24 studios, the studio responsible for hits from artistes such as Samini, Tic Tac, Kwawkese, Okomfuor Kwaade, Afro Moses, Bukbak to name a few.

There he met Samini in 2008 and clicked. Alongside other personal running Stonebwoy and Samini still par with Loyalty and friendship.

He has done various collaborations which are popular with artistes like VIP, Samini, Kwawkese, Obrafour, Afro Moses, Blackrasta and many others.

The latest in his ventures include the release of 3 tracks from the upcoming “Grade 1″ album namely Climax, Push It and Hills and Valley, due out at the beginning of 2012.

Other tracks that will be released on other street tapes (mixtapes) will include like Over N Over, Rudegyal, Pullback, Lighter, Crazy and many more.

Ghanaian Reggae/Dancehall Star Stonebwoy Spotted On Onstage TV With I Octane In Jamaica. Not rated yet
Ghanaian reggae and dancehall super star Stonebwoy looks to make a mark by stepping up his game as expected of him. The BhimNation frontliner is currently …

Grammy Awards 2017: Ghana's Stonebwoy And Black Prophet 's Reggae Albums To Be Considered For Nominations. Not rated yet
BET Award Winning dancehall musician Stonebwoy has hinted his Livingstone Ep is liable to be nominated for the 2017 Grammy Awards. In an Instagram post …

Recording artiste Stone Bwoy said Samini is proud of what he's doing Not rated yet
Dancehall and Reggae artiste, Livingstone Satekla, popularly known as Stonebwoy says his mentor, Samini is proud of the successes he has chalked up so …

Stonebwoy Burniton released debut album "Grade #1 Not rated yet
Stonebwoy’s début album Grade #1 is currently available in Silverbird Stores in Accra, Ghana and online at most online market places, one such is iTunes. …