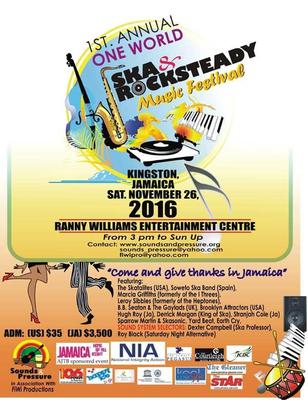 Some of the leading entertainers of these two genres will be in performance from 3 PM to 3AM on the first day. A symposium on the originators of Jamaican music, two tours to Culcha Yard in Trench Town, and Downtown Kingston Music Heritage sites, and two documentaries on the genres will be on from 10 AM to 7 PM, on day 2.

Ska music, which was first played in 1963 by the Skatalites band in the Kingston recording studios, and night clubs, is today played by thousands of bands in the U.S.A., Europe, Japan, Africa, Australia, New Zealand, and South America. It will be the first time a music festival of this kind will be held in the birthplace of the music.

Kingston, the capital city of Jamaica was designated last December a UNESCO Creative City for its music. Both the government of Jamaica, and the local government of Kingston, the Kingston and St. Andrew Corporation (KSAC) are expecting to see the city benefit from this drive of cultural tourism. It’s stated by the World Tourism Organization (WTO) that over 10 million music lovers travel the world annually attending music festivals. As visitors go to Jamaica this
Thanksgiving Holiday weekend in the United States, to absorb the music, culture, food and the people, let it be a great experience for all.

This year’s festival is dedicated to Clement “Coxsone” Dodd, Arthur “Duke” Reid, Cecil “Prince Buster” Campbell, Chris Blackwell, Don Drummond, Rico Rodriguez, Marcia Griffiths, and the Alpha Boys School, who have all made major contributions to the development of Jamaican music. Presentations will be made.
The festival is a production of Sounds & Pressure Foundation, in association with Fiwi Productions Inc. The Jamaica Tourist Board, and National Integrity Action are the major sponsors. Other sponsors are KSAC/UNESCO Creative Cities, Knutsford Court, the Courtleigh, and Pegasus Hotels, Happy Ice, POWER 106, KOOL FM, The Gleaner Company, Happy Ice, and Jamaica Cultural Development Commission.

“The 1st Annual One World Ska & Rocksteady Music Festival is a tactical move of Sounds & Pressure Foundation to position Kingston as a cultural tourism destination, and we have been working on it now going three years. Jamaica is the only country apart from the United States that has given the world multiple musical genres, in Jamaica’s case, four popular genres, Ska, Rocksteady, Reggae, and Dancehall, and we believe this is of great cultural value as they all have impacted world culture. We therefore, want to bring world attention to Kingston, where Jamaica's popular music was born, and Ska, in particular has evolved into becoming far bigger and more accepted in several other countries, away from Jamaica,” stated festival director Julian “Jingles” Reynolds, CEO of both Sounds & Pressure Foundation, in Jamaica, and Fiwi Productions Inc. in the United States, at the festival launch recently in Kingston.

“Ska and rocksteady represents a great period of our renaissance…they are the cradle of that process...it is bringing back something we have been losing in this society… and so to identify with a music festival that celebrates that beginning and accentuates the role that that particular period has played in the development of our civilization today is very, very critical to us in tourism……it is building out the music experience as a discrete product for the world to come and enjoy, and pay for,” stated Jamaica tourism minister, the Honourable Ed Bartlett. The launch was also addressed by the Minister of Culture and entertainment, the Honourable Olivia “Babsy” Grange.