Dancehall Reggae artiste Shaggy, The artiste who's real name is Orville Richard Burrell was born on October 22, 1968 in Kingston, Jamaica.

This dancehall reggae and reggae fusion singer moved to Flatbush Brooklyn when he was 18 years old. In 1988 he took singing lesson in Brooklyn. It was discovered that he could really sing while he was singing with friends in the streets. His break in the music business came while he was serving with the United States Marine Corps during the Persion Gulf War.

After returning from the Persion Gulf he recorded his first hit in 1993 "Oh Carolina". His first studio album "Pure Pleasure" was released in 1993. 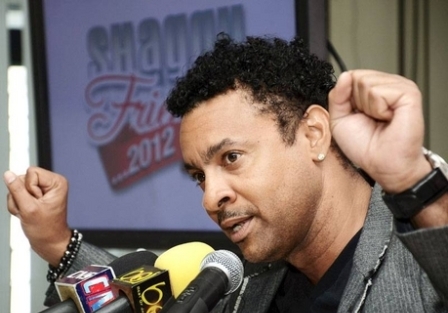 In 1995 he released what most reggae music lovers considered to be his biggest hit single "Mr Boombastic". An album with the same titled was released that same year.

He continue to record and released top tracks such as "Sexy Lady and Angel". Mr Boombastic album which was released in 1995 gave him his first Grammy Award. It cop the award for Best Reggae Album at the 1996 Grammy Awards.

The album was name after his charity concert from which the proceeds are donated to the Bustamante Hospital for Children.

For his contribution to dancehall/reggae music and his country, Jamaica, On October 15, 2007 he was awarded the Jamaican Order of Distinction in the rank of commander (CD).

He has since formed his owned record label called Big Yard Records.

"It wasn't Me" is his biggest hit to-date, this has led to his 2001 album titled "Hot Shot" being a Diamond selling album.

Oh! I almost forgot. How did he get the nickname? It's from the look of his hair.

Shaggy and Friends Set For January 6, 2018 Not rated yet
January 6 is the date that has been set for the biannual charity concert hosted by entertainer Shaggy. Shaggy and Friends will celebrate its sixth anniversary …

Bugle and Shaggy Shoots Video For 'Ganja', Album Set For January 30th Release Not rated yet
Currently gearing up for the release of his sophomore album Reggae stalwart Bugle has enlisted the services of accomplished director Jay Will to shoot …

Shaggy - I Got You (Official Video) ft. Jovi Rockwell Not rated yet
Multi-platinum, Diamond-selling Dancehall Reggae artist & international superstar Shaggy is back & ready to take over your summer once again! Check …

Shaggy - I Got You (Audio) ft. Jovi Rockwell from 'Mr Lover' Album  Not rated yet
Grammy award winning reggae recording artist Shaggy premieres new single titled "I Got You" featuring Jovi Rockwell. "I Got You" is the first single …

Shaggy’s new album 'Out Of Many One Music' flops early on as Reggae projects struggle to sell in U.S. Not rated yet
Despite quality music being produced as part of Reggae music’s apparent renaissance, many of Jamaica’s top Reggae acts continue to garner paltry album …

Shaggy And Ne-Yo “You Girl” Tops Billboard Reggae Singles Digital Chart Not rated yet
Shaggy is gearing up to release his new album “Out Of Many, One Music” on September 24. The reggae star is already enjoying some success with the second …

Shaggy & Rsny - Know Bout We - Da Stage Riddim Not rated yet
Emerging from the gritty streets of Far Rockaway, NY, by way of Jamaica, RSNY was born when four friends combined their individual talents into one musical …

RSNY & Shaggy Bad Jamaican Dance Download Not rated yet
RSNY & Shaggy brings to you the dancehall bands ah make her dance (re-fix). So ladies get ya 6:30 ready and make sure your waistline is up for a challenge …

Love Mi Jamaica - Shaggy, Red Fox, GC (OFFICIAL VIDEO) - Calabash Riddim - Ranch Entertainment  Not rated yet
Let us take you are a journey through Jamaica and show you things we love about our wonderful island! Calabash Riddim Track produced by Felix …

Shaggy and Friends 2012 review Not rated yet
There were much-appreciated performances from the likes of Beres Hammond who was in his usual top form with I Feel Good, Double Trouble and more. Veterans …