The entertainer took to his Instagram page on Wednesday evening to let his followers know that he was OK.

He did not go into details surrounding the incident but expressed gratitude for being alive. The entertainer revealed that he got shot in the back and explained that the incident was an accident. 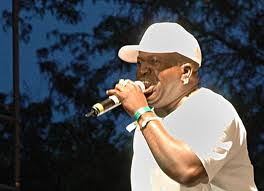 "Yes, my people, one more time. I just wanna say blessed evening or night or day. I just want to say to you it's a shame how you can be here today and gone tomorrow. I want to share this with you. I accidentally get shot last night (Tuesday) in my back," he said lifting up his shirt to reveal the bandaged area where he was wounded. "We're here and we're saying give thanks for life because we don't know when anything can happen, in a minute, in a second. I'm thanking the Almighty God that I'm still here, still pushing the virus and we need to still push the love virus around the world. Blessed love, Barrington Levy say up and ya'll take care of yourselves and be safe."

The video was met with an outpouring of support from the entertainer's Instagram fans, who expressed happiness that the entertainer was not seriously injured.

Many wished him a speedy recovery and urged him to also stay safe.

The STAR tried to get in touch with the artiste to obtain additional information on the incident but was unsuccessful.

The entertainer is currently promoting his song Virus in which he urges people across the world to catch the 'love virus'.

Just a day before he posted the video revealing the unfortunate event of Tuesday night, the entertainer was being tagged on social media after international R&B singer Ciara posted a video of her and son Future imitating Barrington Levy's infamous tongue twisting singing style.

Having caught a hold of the video, the veteran entertainer reposted the video, thanking the singer for recognising the culture and dubbed the singer and her son as beautiful.

Ciara's original video has been viewed more than two million times with several Jamaicans in the diaspora thanking her for recognising Levy's style.

Levy also posted under Ciara's original video to say that it is the sweetest thing he has ever seen.