MASICKA the 19year old DJ/ Singer/ Songwriter who has been dubbed "The Future" by his reggae peers has recently penned and/or performed songs that have created a significantly growing buzz amongst reggae/dancehall fans.

He is also steadily acquiring new fans from across genres due to the hip-hop influenced sound of his latest songs and the increased exposure that he is receiving via the internet in addition to radio play on some of Jamaica's most popular stations, like Irie f.m.. 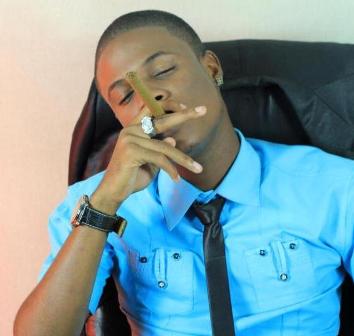 Masicka has become known for a "sick" flow that is lyrically amazing to his fans as he effortlessly shares his colorful experiences with the listener in a way that is easily understood, felt and enjoyed internationally.

After listening to his songs you can see why he is being dubbed "The Future". His songs are a true fusion of both the current reggae/dancehall vibe and the global hip-hop/pop movement. While much of his style is due to his early exposure to various musical genres while growing up on the island, much is also due to the shared vision of he and his partners in the music business, One Motion Music label co-founders, Addis Pablo and Leon Brown.

He has partnered with Leon and Addis to lead the quickly growing music label towards becoming, not only a major label within Jamaica's reggae and dancehall music industry, but an internationally succesful music label able to mix genres and collaborate with other artists around the world.

With One Motion Music, Masicka has been able to best develop his unique reggae/hip-hop style, working with One Motion's camp of youthful creativie producers, musicians and artists.

They are adept at mixing genres in a manner that produces sound that delightfully combines the best elements of the world's music in order to broaden the appeal to a diverse global audience.

The One Motion fever is still spreading, especially on the island, as the One Motion Music label's roster continues to grow. New recording artists and producers have been attracted by their global reggae/hip-hop sound and are now coming into the fold. With all the attention surrounding One Motion and its young team of founders, the future definitely seems bright.

Still, for One Motion Music founder/producer/artist, Addis Pablo, the mission is more of a family tradition. Addis is the son of the internationally acclaimed reggae pioneer and musical legend, Augustus Pablo. He is considered by many to be a musical genius and is often credited by reggae historians to be one of the "Creators of Dub".

Augustus Pablo was a master instrumentalist who made a lasting contribution to Jamaican music both through his own work and through the development of younger artists signed to his Rockers International label.

Continuing in his father's footsteps, Addis hopes One Motion Music will provide a creative home for various artists like Masicka to record with other hot artists and make hits that are popular in Jamaica and internationally.

And don't forget about One Motion Music co-founder Leon Brown. Leon simply has a special talent and passion for making good music. That is how he got his start in the business.

Now, he has already written/produced for established reggae/dancehall artists like Bounty Killa, Turbulence, Roundhead and I-Octane among others. Leon has experience beyond his years and in addition to his musical talents, he serves as One Motions de facto team captain.

He is currently finishing his degree at the University of the West Indies, while producing music. At One Motion, Leon is known as a visionary and someone who knows the game. Together, Masicka and his "sick" crew at One Motion Music are forging their own new path into this global era of music.

Masicka Now Able to Work In USA After Receiving VISA. Not rated yet
Dancehall artiste Masicka has obtained documents allowing him to perform in the United States of America. Corey Todd, the artiste's manager, said there …

Masicka feat. Ishawna Regardless Not rated yet
One of the brightest talent in dancehall music Masicka has teamed up with Ishawna for a second collab titled Regardless. 'Regardless' is a follow up …

Masicka to release Tyler and Puffy Part 3  Not rated yet
Dancehall star Masicka has been earning major props in dancehall circles with his innovative, visceral serialised singles, Part 1 and Part 2 of the Tyler …

Masicka Collaborates With European Producer Hemp Higher Productions  Not rated yet
Masicka, one of Dancehall’s most potent young lyricist has debuted the first of several music videos for 2013. Known for the songs 'Baddest', 'Go …