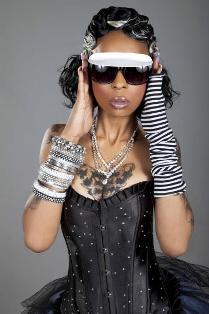 Hyper later moved to Fifth Phase in Waterford, Portmore, St. Catherine, where she stayed with her aunt and cousins for a few years, two very different communities, life was never easy but with the struggles and priceless experiences shaped her into the strong and ambitious person that she is today.

Mentored by top flight deejay and childhood friend, Vybz Kartel, she honed her craft well, From an early age Lisa wanted to do music and being around Vybz Kartel inspired her even more.

She use to pen lyrics while still in high school. "I write out the lyrics of his songs and sell it to the students at my school.

It was easy for me because I was around him all the time so I got the chance to catch the lyrics faster, and it also helped me to develop my own writing skills ".

After Gaining recognition for hit songs such as Wine For Me which is popular in the Eastern Caribbean and Champion Bubbler which is a huge hit in the Bahamas where she already landed several bookings, has emerged as one of the most famous figures in dancehall in recent times.

At the age of 18yrs she started pursuing her music career which was a year after graduating from The Queen's High, writing and developing her craft. At the age of 19yrs one year later, 2008, she joined Portmore Empire. For her it was a dream come true. "Nothing felt better than that because Pupa (Vybz Kartel) had always promised to turn me into a star," she laughed.

Grateful for the exposure and experience of performing in countries such as Switzerland, Barbados, Bahamas, Grenada, St. Lucia, Guyana, Trinidad & Tobago, Lisa Hype is now ready to strike out in the world on her own and wants to ensure that she is taken seriously.

She has learnt a lot of things while being affiliated with the Portmore Empire camp, and one of those habits that she has adopted is Vybz Kartel's incredible work ethic.

"Even on New Year's Eve, I was in the studio working and on New Year's Day, the same thing. The public can expect versatility, creativity and consistency from Lisa Hype in 2010. I am giving the people what they want, me a go work harder than everybody else to prove myself, me learn that from Pupa (Vybz Kartel)," she said.

In November 2009, an x-rated photo surfaced on the Internet which showed her in a sexual act, that incident made her a household name, and the butt of many jokes in the tough, cruel world of dancehall music.

But through it all, Lisa Hype has remained unbreakable. She will not be moved. She has hit back at her many detractors and after a triumphant performance at Sting 2009 at Jamworld in Portmore, St. Catherine, she is poised for even bigger things.

Lisa Hyper said that she would love to partner with an agency to go out into the high schools and help reinforce certain messages as it relates to safe sex, condom use and the general safety of young teens from possible sexual predators. "I really connect with young people well and I want to teach them about safe sex. Know who you trust, don't talk to strangers; don't let yourself be abused by anyone.

Love yourself, Practice safe sex, protect your heart and your body at all times, young teens need to hear this message, my life alone is a message about knowing who to trust," she said. .. "They say you can't really predict the future but I am going to be big in this world. I vision something that most people wouldn't dream of, the Lisa Hype name will be international, up in lights, in big magazines, front page and centrefold.

Half of my story has not yet been told," she said, laughing as she rhymed. "When you put in the hard work it always pays off, I can attest to that." She is no longer a member of the Portmore Empire, and in a post-split statement, thanked the members for their contribution to her career.

Then called Lisa Hype she announced that she has changed her name to Lisa Hyper. Since leaving the Portmore Empire, she won the award for Best New Female Artiste of the Year at the annual EME's (Excellence in Music and Entertainment) and her combination hit single, Bills, featuring Gaza Kim peaked at 3 on the HYPE TV reggae music charts.

Lisa hyper hospitalized Not rated yet
Dancehall reggae artiste Lisa Hyper was hospitalized because of stomach Ulcers. In a press release the deejay said "I am suffering from stomach ulcers …