Keron "Kabaka Pyramid" Salmon is a multi-talented artist and producer coming straight from the streets of Kingston, Jamaica with a unique musical style blending the lyricism of Hip hop, with the energy and melody of Reggae and Dancehall.

He is based out of the Bebble Rock music camp and through his liquid and hypnotizing delivery spreads the positive messages of spirituality and conscious evolution that forces you to listen. 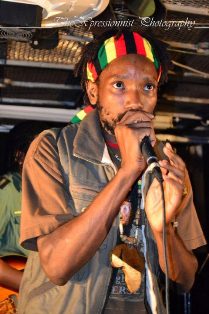 The name "Kabaka" is Ugandan for "King" and Pyramids are thought by the artist to house the mathematical proportions of Universal Laws that are eminent in the creation of this universe.

He is an ever-evolving artist that has numerous ways of expressing his creativity.

The ability to watch and learn from others around him has made him into somewhat of a Jack-of-all-trades, writing lyrics, producing tracks, engineering/recording himself or other artists, mixing songs, editing video/photos, or even learning to play the guitar!

His passion for music began at early age when he would change the lyrics to popular songs and record his own version on his mother's tape recorder. What began as a humorous venture was actually a stepping-stone for the artist we know today. Reggae music has always been a strong influence on the Kingstonian lyricist, but during high school it was Hip Hop music that captivated him; reciting his favorite Canibus or Inspectah Deck lines constantly. The influence of both genres can be easily detected as he seeks to find the perfect fusion of the two cultural expressions.

Kabaka Pyramid made his first major break-through when he was awarded a place on international selector; Dj Green Lantern's "Myspace Invasion" Mixtape in 2007. This was immediately followed by a release of his own promotional mixtape "The Transition Vol 1" which received much acclaim in the underground hip-hop community.

Fast forward to 2009; Kabaka Pyramid continued to garner even more notoriety with the release of the “ The Transition Vol 2” mixtape whose internet pre-release on www.bebblerock.com saw over 100 downloads in its first few days. His lyrical ability and deep spiritual messages are what he is most known for presenting on this project, raising the bar on the standard of Hip Hop in Jamaica.

Also in this time Kabaka has featured heavily on Jamaican airwaves, with reggae songs like "Never be the same" and “Carry On” which has been given regular rotation by ZJ Rush on Zip FM. He recently collaborated with Rush and his Code Red Production team with a break-though appearance on their "Enemy Lines Riddim". He has also gone number 3 on the Bermuda music charts with the track "Love is all I see" featuring with local artist Ashanti in 2010.

Busy in the streets Pyramid has been appearing on the Live Music scene in Kingston with live performances at the Manifesto Jamaica Festival 2010, Jaria Reggae Month 2010, Jamaica Vybez, The Next Generation of Reggae, Bands Incorporated (Featured by The Indiggnation Band), and Conversations at Wickie Wackie - just to name a few.

As a Producer Kabaka Pyramid saw chart success in the Bahamas soaring to number 3 in the country with the 2009 release of “Dead Man Walking” by Bahamian artist Jah Doctrine and Bebble Rock label mate Massyka.

He has just released his “Rebel Music” EP that is free to the public at www.kabakapyramid.bandcamp.com. This project is a fusion of roots rock, reggae, dancehall and hip hop and is intended to show the world where Kabaka Pyramid is looking to take Jamaican music, as well as spread the positive messages of spirituality and conscious evolution that you find whenever he grabs a mic. This July 2011 release has received an overwhelming response worldwide; gaining Kabaka homepage features on websites such as Reggaeville and United Reggae.

Stay tuned for more releases and performances in the coming months! “To me Reggae and Hip Hop go hand in hand....when they procreate, Rebel Music is born! Some believe that each art form must remain pure....I’m not here to oppose. But fusion is the foodstuff of evolution, and evolution is constant - both physically and spiritually” Kabaka Pyramid “Kabaka Pyramid is one of the most promising talents I have seen in a while” Protoje

“With a solid list of skills not only in the booth but on the mixing board, and an array of lyrics that preach a message of love, self-awareness and African pride, Kabaka Pyramid is well on his way to a career that should not only lead to greatness but also lead a lot of fans to righteousness” Aesthetics Now Mag.

Hear mi nuh Frass, Accurate Well I a bun the fire well red Listen what the isences a said Things and time getting dread Never gonna be a slave fi dem …

Kabaka Pyramid Release First Single 'Can't Breathe Off His Debut Album Not rated yet
New York, New York (June 2, 2017). After many singles, two mixtapes and a 10 track EP called Lead The Way, Kabaka Pyramid is ready to release his first …

Walshy Fire Presents: Be Inspired (feat. Raekwon x Kabaka Pyramid)‏‎ Not rated yet
Be Inspired is the lead single from the freestyle ski film soundtrack to the film BE Inspired which will release in September 2016. The song is a duet …

Kabaka Pyramid - Last Available date - October 2015 Not rated yet
The Revolucionary Lyricist, Kabaka Pyramid & The Bebble Rockers are now available for bookings. This October 2015, we dare you to make part of the European …

Young Lion Kabaka Pyramid Joins with Reggae Legends Inner Circle Not rated yet
Kabaka Pyramid joined Inner Circle along with a variety of people, all from different ethnicities. The lengthy but painless day of shooting started off …

Big up to Kabaka Pyramid and his Mother Not rated yet
Roots Reggae artiste Kabaka Pyramid's mother recently celebrated her birthday on May 26th and Kabaka was there to show her some love on her special day. …

More in store from Reggae Singer Kabaka Pyramid  Not rated yet
About a year ago, one of Jamaica's fastest-rising cultural artiste, Kabaka Pyramid, introduced himself in a full suit of red to the Rebel Salute crowd. …

Kabaka Pyramid Returns To Jamaica After California & European Tour Not rated yet
New York, New York (September 26, 2013). As the summer comes to an end Kabaka Pyramid is back on the warm island of Jamaica after touring the West Coast …

Kabaka Pyramid To Release - 'Lead The Way' In November 2013 Not rated yet
Reggae artist Kabaka Pyramid is set to release his new EP, “Lead the Way” in November. The project is a compilation effort featuring multiple fan favourites …

Kabaka Pyramid on Billboard Charts, Warrior Video and more Not rated yet
KABAKA PYRAMID IS #1 ON THE BILLBOARD NEXT BIG SOUND CHARTS!! The fast rising reggae/dancehall artist has been named by Music Publication Billboard …