Delroy Junior Reid originally came into prominence around 1983/84 as part of the Waterhouse crew, a dancehall singer collective who sported a signature style, which included Reid, Half Pint, and Yami Bolo, among others.

He started on the Youthman Promotion sound system owned by the legendary Sugar Minott, and quickly gained fame in Jamaica and dancehalls abroad from such hits as “Original Foreign Mind”, “Reggae Gone Cross the Border” and his take on Michael Jackson’s “Human Nature”. 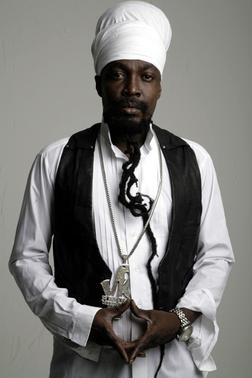 Upon the departure of Michael Rose from the Grammy-award winning group Black Uhuru in 1985, Reid was chosen to fill the front-man’s spot. Comparisons between Reid & Rose’s styles occured quickly, and Reid was even considered a Rose

imitator…due either to his performing old Uhuru hits or his adoption of the “tu-tu-tweng” style which was Rose’s trademark.

Nonetheless, Reid made his mark on two Uhuru albums, “Brutal” and “Positive”, and continues to perform Uhuru material to this day.

He left Black Uhuru soon thereafter, and in 1990 he recorded an album and scored a hit with the same name which would be his anthem. “One Blood” defined Reid’s solo identity and the name Junior “One Blood” Reid is known by every reggae fan worldwide.

Throughout the rest of the 1990s, however, Reid had little success in scoring hit singles, and recorded albums without much response. His most notable tunes were deejay combinations, particularly Bounty Killer (“Seek God” and “World Too Haunted”). Then, the turn of the new century brought an entire new audience to his music.

Reggae and Dancehall artiste, Junior Reid, born Delroy Reid on June 6, 1963, was raised in the gritty Waterhouse community of Kingston Jamaica. During the politically turbulent late 1970’s, he recorded his first-ever single “Speak the Truth” at the age of 13 for his friend and mentor, the late Hugh Mundell. Reid later went on to form his own band, the Voice of Progress, and after a local hit with “Mini-Bus Driver” the group scored local success with an album of the same name.

By the early ’80s, Reid was commissioned by the great Sugar Minott to record a number of tunes on Minott’s Youth Promotion label, enjoying considerable popularity with tracks such as “Human Nature", “A1 Lover” and the evergreen “Foreign Mind”, an uplifting anthem of pride for ghetto youths whom Reid increasingly championed. Junior Reid transferred his talents to King Jammy’s studio where his fast-growing success rose yet another notch. “Boom Shacka Lacka” was his first UK hit and led to another exceptional album, after a number of fine singles which included: “Youthman”, “Bank Clerk”, “Sufferation”, “Give Thanks and Praises” and “Higgler Move”. Reid then launched his label “Jr Productions” with his first single “Settle Down” by Barrington Levy.

His opportunity to reach a wider international audience came with the offer to be the lead singer in Black Uhuru. Always a strong follower of Black Uhuru, and with a similar vocal style, Reid took the group to another level. Three of the singles he did with Black Uhuru “Pain”, “Nah Get Rich and Switch”, and “Let us Pray” were released on Junior Reid’s label JR Productions.

With Black Uhuru, Reid toured Europe, the UK, the USA, Canada and Bermuda. In 1988, as a solo artiste Reid had a hit in the UK with the collaboration with Coldcut, “Stop This Crazy Thing.” He had an even bigger hit in 1990, with “I’m Free”, recorded with The Soup and Bermuda and reaching number 5. Two years,no US visa and three albums later, Reid’s interest to produce material for himself, and desire to regain his domestic popularity drove him into the solo arena and to launch the One Blood Recording Studio while focusing on his label JR Productions. Reid has produced for Dancehall artiste Ninjaman on many occasions since the early 1990’s. Reid produced two songs on Snow’s second album, Murder Love, released in 1995. He has also produced for Mighty Diamond, Big Youth, Dennis Brown and Gregory Isaacs.

1989’s “One Blood” saw him re-established at the forefront of the reggae scene. “One Blood” immediately became an anthem for family and unity in America and around the world. Reid’s vocals have since been used widely in hip hop with more collaborations with international acts than any other reggae/dancehall artiste. Such collaborations include “One Blood Under W” and “Jah World” from The W album by the Wu-Tang Clan, which was released in November 2000. His next collaboration with Guru on the song “Mashing Up the World” on the album Jaz Mattaz. In 2006, he collaborated with West Coast hip hop artist Game on the song “It’s Okay (One Blood)” which samples Reid’s 1989 single “One Blood”. The song hit the top of the Billboard chart and was also included in the video game Def Jam: Icon for the Xbox 360 and the PlayStation 3. The song was then remixed again and the official remix was released in November 2006 featuring 25 hip-hop artistes including The Game.

Junior Reid I Got The Sauce Not rated yet
Check out this brand new single from veteran reggae singer Junior Reid titled Sauce. Jamaica Reggae artist Junior Reid rapping on the ooouuu Instrumental …

Junior Reid To Launch Album At Crescent Court Not rated yet
International recording artiste Junior Reid will be releasing his long-awaited studio album, 'The Living Legend' on August 25th. Originally slated for …

Junior Reid Bubbler Official Music Video Not rated yet
This is the official music video for veteran reggae music singer Junior Reid for his single 'Bubbler' off the Universal Riddim. WATCH VIDEO BELOW... …

Junior Reid 'Guns Dem Load' Vybz Kartel & Rapper Uncle Murda Not rated yet
Reggae Stalwart Junior Reid, known for ‘One Blood’ among other classical records has lent his voice to a project that continues to gain mainstream attention …

Junior Reid Responds To False Concert Promotion Not rated yet
KINGSTON, JAMAICA | JUNE 14, 2013 | Reggae Stalwart Junior Reid, now in New York City ahead of his North American tour would like to advise the public …

Junior Reid Collaborates With DJ Khaled’s We The Best Music Group Not rated yet
Accomplished Reggae superstar and entrepreneur Junior ‘One Blood’ Reid now gearing up for an intense overseas campaign, continued to raise his international …