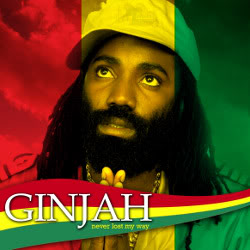 It was logically a short hop mentally for Hammond to name the young man Ginjah. "This is Valentine Nakrumah Fraser, an artiste called Ginjah, Mr Beres Hammond gave the name to me," he said, adding that he is representing black liberation, black consciousness, and the teachings of Haile Selassie I.

Having been invited to be a part of Hammond's Harmony House label, He began recording in 2000. And by 2001, he was on a tour opening for Beres Hammond several shows stretching across the major Caribbean cities, leaving behind a trail of satisfied patrons begging for more.

"It was never an easy task opening for a musical icon like Beres Hammond," he admitted. Added he: "But I went out there and did my best and met the challenge with full force." As expected, with good work, comes more work. So Ginjah went on touring with Beres Hammond throughout the world, inclusive of places like Europe, Canada, the United States and Japan.

For the past two years, Ginjah, now with I Land Music, has stepped out on his own. "I'm doing my own thing right now," he said before adding: "I'm with I Land Music from 2004. Right now I have a song out called Music Alone that's getting a lot of rotation, I've a video and an album to come soon." He explained that he is now in the process of promoting the song (Music Alone), to pave the way for his forthcoming album of the same name. "You have a lot of albums that get lost in the mix, and this is a wonderful album, so we do not want this album to get lost in the mix. So we're promoting Music Alone to the fullest right now," Ginjah stated.

He said that since leaving Beres Hammond, he has done over 30 songs. "I'm recording a lot. I've done songs like Thieves Says, Responsibilities - I've done that for Harmony House, also War In The City, Rise Above, Manners, and Go Thy Way. Right now, it's just making more music, more conscious music," enthused the artiste who has just been back from Europe, where he did a three-week tour of Germany, Austria and Switzerland.

This was Ginjah's first solo tour which he described as a great experience. "This was the first time I was doing my own thing abroad," he said while adding: " The first show that I did was in Berlin, and that just set the stage for the rest of the tour. The shows them went down well, very well. You dun know Ginjah good for everything," he bragged.

I-Octane Teams Up with Ginjah on Single from Forthcoming Album

Reggae Singer Ginjah lashes out against child molesters  Not rated yet
Reggae singer Ginjah is not afraid to tackle social issues with his music. He recently released a thought-provoking single titled Pedophile on the Young …

Reggae artiste Ginjah reaped huge success in 2013 with 'Sweet Killer'  Not rated yet
The year 2013 will be forever etched in the memory of reggae singer Ginjah. At the start of the year, not much was heard from the former Beres Hammond …

Reggae Singer Ginjah is back with 'Sweet Killer'  Not rated yet
It has been almost seven years since Ginjah scored his breakthrough hit titled Never Lost My Way. The song that was produced by topflight producer Kemar …