There are many words which could be used to discribe "Carlton Hylton" aka Ghost. 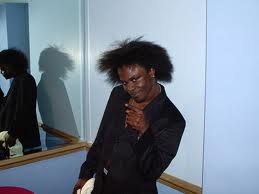 He can be discribe as been unique, sensational, soulful, dynamic and sexy.

In 1977, at the tender age of 3, he was already performing on street corners for the people of Matches Lane, the Kingston community where he was born.

The more he sang, the more his respect and reputation grew. As a youth inspired by Michael Jackson and Bob Marley, he sang, sang and sang perfecting his God given talent.

Then came his first solo recording, "Killing Me Softly" for Patrick Roberts on the Punany riddim. From then the tunes began to flow fast and furious. In '91 came the big hits for Shocking Vibes, "Do You Remember" and "Something Inside So Strong". And then onto hits like "Here I Am" for Colin Fatta and "Oh Carol" for Digital B on the Stalag riddim.

Around this time was when he began to focus on the slow tunes that would take him to his highest heights yet in the music business.

In 1992, he was given the opportunity to tour with Legendary DJ Shabba Ranks, further securing his position as one of the reggae music's rising stars. Later that same year, he recorded "God Is Truly Amazing" with Beenie Man.

It was not long after this that Ghost began to work closely with Roundhead and General B, who would soon combine to create the formidable Monster Shack Crew. "We used to record up at Arrows studio", he explain, "and when we finished we used to move together.

We would go up to a place Roundhead had up in Papine. It never build up yet, so we used to call it the shack. Roundhead did have a tune out at the time, "Man A Monster", that's where the Monster Shack came from".

The Crew released an album in 1998 entitled Monster Party. Monster Shack has since renamed themselves Monster Empire.