Ganja in Dancehall sessions and Clubs

The use of Ganja in Dancehall session and also some night club, Is very popular in Jamaica.

This herb is also known as Cannabis and marijuana.

The typical herbal form of cannabis consists of the flowers and subtending leaves and stalks of mature pistillate of female plants.

The resinous form of the drug is known as hashish.

Ganja is said to be the most widely used illicit substance in the world.

Most of the artiste in the dancehall and reggae music industry uses this drug. They will tell you that it helps them to meditate. 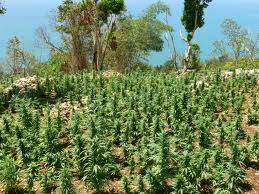 Ganja in Dancehall sessions and clubs

The possession, use, or sale of cannabis (ganja) is illegal in Jamaica and most part of the world.

In dancehall sessions and Clubs where smoking are allowed, cannabis is widely used.

The users will tell you that it gives them a good vibes (feeling) when they burn it. (smoke it)

Contrary to what most people might say or think, this weed is not only used by the rasta man, but also people using it to help with pain.

How Does CBD Help With Pain Relief By CBD Armour

The Rastafarians consider Ganja to be "The Weed Of Wisdom" as its use helps one to gain wisdom. They also use it as a religious rite and as a means of getting closer to their inner spirit.

The Herbs as it is also called carry jail time in Jamaica, most people here believe that it should be legalize.

What do you think?

To post your comments here, Please used the from below.

Pages related to Ganja In Dancehall and Clubs

Emerging reggae artist, Kappo, has released the official video for his fast rising track, “sensimillia.” In the video, Kappo indicated which side he is on in the ongoing conversation about the legalization of ganja, particularly on the island of Jamaica.

He and his team made it a point of duty to include a scene which shows them publicly demonstrating for the acceptance of marijuana.

Several clips in the video were shot in Westmoreland (in Jamaica), one of the parishes known for growing cannabis in abundance. Following the video shoot, Kappo had this to say: “I think the decriminalization or legalization of marijuana is of much importance.

If you look around you’ll see other countries gravitating towards this, especially for medicinal purposes, so we as Jamaicans need to also make a move in this direction.”

The song “Sensimillia” is now getting serious rotation on reggae platforms worldwide. The reviews from experienced, established reggae DJs (based in different parts of the world) are overwhelmingly positive.

Since its release, Kappo has been extremely busy doing interviews, dubs, appearances etc. Several members of his team believe that the release of the official video will now intensify his schedule and possibly propel him further in the music industry.

Return to Dancehall Reggae Music from Ganja in Dancehall

Return to Dancehall Reggae Culture from Ganja in Dancehall