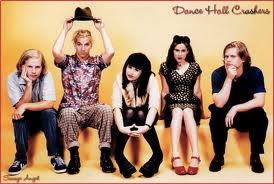 The Band is located in Berkeley, California USA

The band was form by Matt Freeman and Tim "Lint" Armstrong. They were Originally from a band call Seminal Ska Punk band.

The name Dance hall crashers was brought to the by band by Erik Larsen, he got it from a Jamaican Ska Band.

Their first album titled "Say Cheeze was self released on cassette only in 1989.

They have since released over ten (10) album/compilations, their latest being "Live at the House of Blue", this was released in 2005.

Their music covers a wide variety of Ska and Ska Punk compilations as well as movie soundtracks.


You may also be interested in: www.areasontomakemusic.com.  Free reviews for artists and inclusion in promotional videos for all genres of music.