Bramma and Dertee Makes It Clear - "Bruk Life Don't Fit Wi"! - [March 26, 2018 - Kingston, Jamaica] In December 2017, Bramma embarked on a month and a half long promotional tour of the United Kingdom, which the S-Lock Entertainment artist capitalized on by doing as much as he could while he could overseas. 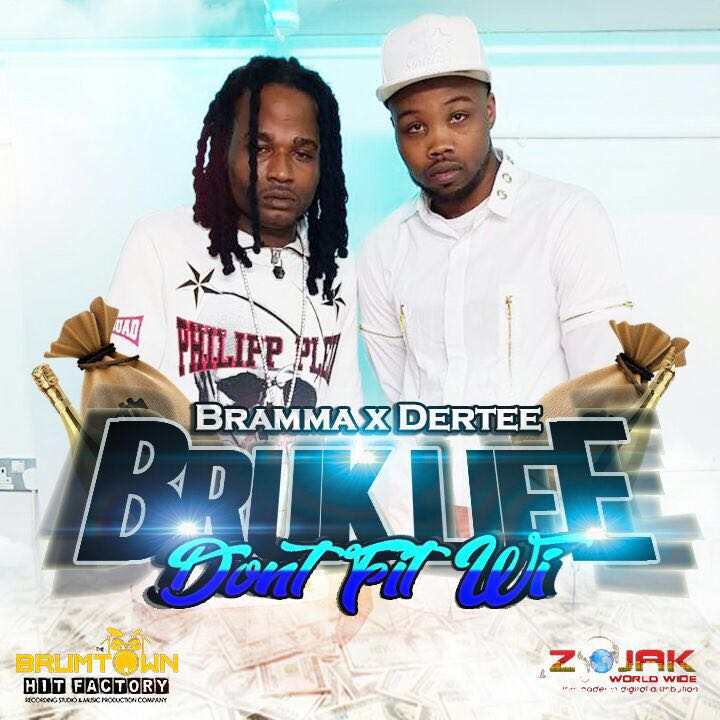 The trip progressed deep into the New Year and before his return to Jamaica towards the end of January 2018, it was more than productive.

Whilst there, the Jamaican superstar recorded several songs for local producers and has since released quite a few. He linked up with UK based Jamaican Dancehall artist, Dertee, through their management companies, to do a collaboration. Both artists, with their talent and expertise, had managed to easily whip out an instant hit. “Bruk Life Don't Fit Wi” was born and they are proud of how it turned out.

Released in February 2018 and produced by KMD at Brumtown Hit Factory, “Bruk Life Don't Fit Wi” is testament to all the struggles an artist tends to endure in order to present themselves in a specific way to their fans and for that, they have to live, act and be of a certain stature in the public's eye. “Bruk Life Don't Fit Wi” speaks to a varied lifestyle of necessity and not that of greed. It's a fun track that's great for all ears, fit for any radio station. It has already received airplay on major Dancehall radio stations across the United Kingdom, as well as mainstream programming, including the infamous BBC Radio.

BBC Music Introducing in the West Midlands on BBC WM 95.6FM premiered the track on February 24, 2018 to its eclectic group of listeners with a positive reception especially from the Jamaican Diaspora. It was a huge step for both artists, as the program is not a typical Dancehall, or even Reggae, station. Lady Empire and Hashtag, both from New Style Radio, each have the track in rotation.

Popular disc jock, Seani B, from BBC 1Xtra has been one of the first to feature “Bruk Life Don't Fit Wi” on the station and in his sets whenever he is at an event. He has stated: “Hands down one of the baddest song fi di new year!”

Now they have their sights set on taking over the Jamaican market with this sure fire hit.

“The song loud. Thanks to S-Lock and Bramma for making this collab happen. Me done a hit a England a ready. Now me sure fi hit a Jamaica to,” added Dertee.

The two artists are expected to go full throttle with promotion of the track, as each of their teams, based locally and overseas, have been doing whatever it takes to get the justice the track rightly deserves. A video was shot on location on Broad Street in Birmingham while Bramma was still in the country. Directed by Levi St Juste, the video presents clean visuals, luxurious vehicles and beautiful women. It will be premiered on various YouTube Vlogs based in Jamaica and in the UK, namely Akam Entertainment, Krish Genius, Wicked Hype, GRM Daily, SBTV and Link Up TV. Popular YouTube Vlogger, Rawpa Crawpa, will review the music video on his channel as well.

A month after it's official release, Unity Sound's More Fire Radio Show debuted “Bruk Life Don't Fit Wi” at number 8 on their Top 10 Dancehall charts for the month of March. The show airs on radio stations in Japan, USA, Trinidad, Cayman Islands and Australia with host DJ Crossfire. Zojak Worldwide is the distribution company in charge of their music, therefore, they have more than enough belief in this track and with the anticipated success they expect will follow, Bramma and Dertee need not worry about a “Bruk Life” anymore.