Alex Marley - lead singer and guitarist along with his Black Lion Band Members have become a live concert phenomenon in Jamaica where Alex and his band have been performing for seven years.

Alex has a growing fan base locally and also on the internet. Born on the 29th day of July, 1987 in Kingston Jamaica, Alex sings of a universal message of peace and love. 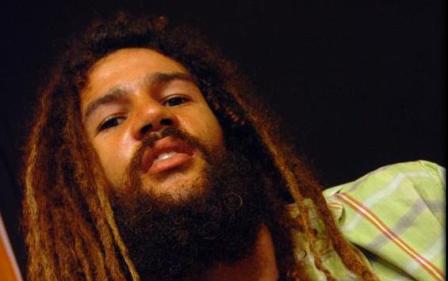 Alex grew up listening to various forms of different music : amongst people like his cousin Bob Marley and sons as well as other greats like Garnet Silk, Burning Spear, Jacob Miller, Peter Tosh, Jimmy Hendrix, Carlos Santana, and Dennis Brown he was called to music at a very early age as he started Writing songs since age eleven.

He attended St. Georges College and while there he wrote his first song “Color Prejudice,” after which he went to Quality Academics where he excelled in Literature and History and also won the school music competition and took home the cash prize. “Marley Rebel” as commonly called by his friends also enjoyed reading books outside of his school syllabus some of which are: The Autobiography of His Imperial Majesty Haili Selassie I , The Books of the Bible, Kebra Negast, Fetha Negast, as well as The Philosophies and Opinions of Marcus Mosiah Garvey.

His aptitude for these subjects was translated into his music and on deciding to pursue this career path he was led to The Edna Manley College of Visual and Performing Arts where he studied guitar and voice. He also plays a number of other instruments such as the piano, keyboard, steel pan, drums and bass and composes his own music. He has also been the star in TV commercials such as Coca Cola advertisements, which he also helped to script and has also been featured in local films and movies. Alex Marley recorded his first single “Times Dread” in 2007 at Tuff Gong International Studio which was quickly followed by the recording of his debut album “Love” currently available on itunes, e-music, rhapsody, Amazon, and Napster and has been played on most radio stations in Jamaica as well as some in the US and UK.

Inspired by Haile Selassie I, He has Attended the Ethiopian Orthodox Church as well as had the privilege to chant with different Rastafari elders within the different parishes and hard to reach areas of Jamaica. He has developed a distinctively mellow sound that is predominantly based on reggae with an eclectic and acoustic blend of all genres of music and has been featured on several shows in Jamaica; among others held at Weekenz, The Village Café, Redbones, Grants Pen, Seaview Gardens, Waterford Portmore , Nine Miles St Ann as well as Jamnesia Surfing Club Bull Bay St Thomas.

Alex Marley collected generous accolades for his performance at “Livity” in commemoration of H.I.M (Haile Selassie 1) 116th birthday. Performing on the same stage with the people like Etana, Taurus Riley, Lutan fiya ,High Octane, etc.. and earned himself an interview with The Gleaner company(popular news paper in Jamaica). In his music, he speaks love, peace, liberation, and principle and plans to use it to spread Rastafari message to all the countries of the world. Not only does his lyrics of peace, humility and love spring from his life but it also inspires others which is very much apparent in his volunteer work with children where he has taught music at various schools including St. Hughs Prep and Greenwich farm all age (near trench town) as well as summer camps at various institutions.

Hearing the youths play songs they had learned through his lessons makes him feel as he is making a difference in the world. Music aside, there is a lot more to Alex Marley than meets the eye. He is the holder of a 4th degree brown belt in Zendoe Kai Kan Karate and was a member of the 2005 Jamaica National Surfing Team where he represented the country in the World Junior Pros at Huntington Beach, California.

His other interest also includes: Vertical Skateboarding, Motocross, Horse Riding, Golf, Tennis, Basketball, and football. All this is somehow incorporated in either his lyrics or his performance and helps to define him both as a person and as a performer who has a calm side and another very energetic aspect to his performance. He is currently unsigned, and working on new material with his band.

Reggae singer/songwriter Alex Marley release the video for his single “Miss Werl,” directed by Scot Jay. The single was written and produced by Alex. …