Aurelia Dey is a professional dancer and recording artist, who specializes in Afro-beat, dancehall and world music. 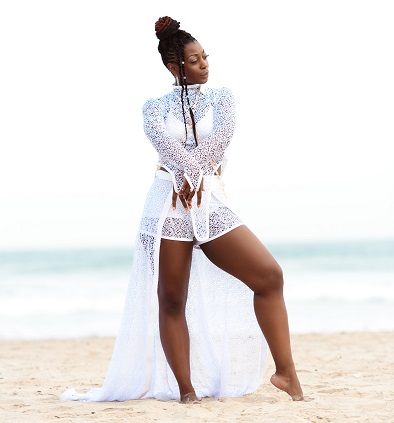 Though she was born and raised in Mölndal (which is located outside Gothenburg) in Sweden, both of her parents are from West Africa, specifically Ghana. Her mother and father were among the first set of Afro-Swedish to move to the Mölndal region during the early 70s.

Her Dad studied at the City's university with the hopes of building a better life for his children, something he clearly succeeded in doing. Based on the foundation that was laid for her, young Aurelia was able to pursue her dreams right from the start.

Her first career choice was that of a professional dancer; as such, she began studying dance while in high school. Aurelia advanced so much that she eventually relocated to Los Angeles to further her studies and improve her skills as a dancer. Though she learned a lot while there, her time in L.A. was short lived (approximately three years) because she had difficulties acclimatizing to the conditions in California.

She also became very discouraged by the competitive atmosphere she encountered in the city of dreams. That being said, one of the positives that came from her time in Los Angeles, was her realization that she can and should strive to be a full-time singer. This awareness came about when she was told by a friend, who heard her singing, that she should seriously consider it because she was that good.

Once she returned to Sweden, a focused Aurelia Dey began carving out a path for herself in the music industry. Inspired by Jamaican dancehall artist Lisa Hype - who was at the time, a member Vybz Kartel's Gaza crew, and someone she found to be appealing and controversial - Aurelia created a captivating image and branded herself as Miss Relli.

Though she has now risen to a level of prominence in the Swedish urban music scene and goes by birth name, Aurelia has had to overcome countless challenges.

For the first few years she was one of a handful of Black woman in Sweden that was committed to the dancehall genre. That meant that she had difficulties getting booked for shows, as well as getting the opportunity to be featured on projects. This was an ongoing struggle until American R&B singer, Justin Bieber, released his hit song Sorry, which became a commercial success for dancehall music.

Another challenge she faced was being over qualified. Owing to the fact that Aurelia mastered music at Gothenburg University, she has unique skills when it comes to transitioning between keys, expanding her range, doing harmonies etc. Sadly, this made working with untrained producers grueling. At the time, she approached music composition very different than most, and this made her studio sessions uneasy.

Determined to succeed, Aurelia Dey refused to allow anything or anyone to discourage her. She has jumped over every hurdle in her path and now stands as a force to be reckoned with in the Swedish entertainment industry. One of her proudest accomplishments to date is to have had the opportunity to work with the all-female band Sally Swag.Currently, Aurelia Dey is working on new music, while simultaneously promoting her latest release, Additionally, Aurelia and her team are in the process of putting together a Scandanavian tour for the upcoming festival season.

When she is not making music, Aurelia Dey spends her time working with the Swedish National Theatre, where she is writing a musical. She is also the owner of , a school dedicated to teaching dance in various forms. Finally, Aurelia is committed to educating everyone, particularly young people, about racism and feminism.