Winston Riley was born in Kingston, Jamaica in 1946. Also known as Mr Techniques, Riley was a Reggae Songwriter and producer. 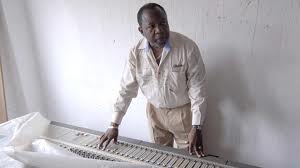 His entry into the music industry was at 16 years old in 1962, when he formed The Techniques harmony group, which recorded their first tracks for Byron Lee, and then later recorded for Duke Reid. In 1968, he left the group and formed his own Techniques record label, moving into production, producing artistes like Boris Gardiner, The Escorts, Alton and Hortense Ellis, and Johnny Osbourne.

His own song, "Double Barrel", performed by Dave and Ansell Collins under Riley's own production, was one of the first international reggae hits, reaching in the Dutch and UK Singles Chart.

His "Stalag" riddim has often been used. The rhythm was first released in 1973, as the instrumental Ansell Collins track, "Stalag 17", named after the World War II film of the same name. It reappeared later as "Stalag 18", "Stalag 19", "Stalag 20" and "Ring the Alarm Quick".

Riley produced General Echo's hugely influential The Slackest album in 1979, and he went on to launch the careers of Sister Nancy, Buju Banton, Cutty Ranks, Lone Ranger, and Frankie Paul.

The band, Widespread Panic, recorded his song "Arlene", and have performed many versions of it at their concerts.

On 1 November 2011, Winston was shot in the head at his home in Kingston.

According to police, he had been the subject of several earlier attacks, After being is a coma since the shooting, he died on 19 January 2012.

He is regarded as one of the most sucessful Reggae music producer of all time.