"Zvuloon Dub System demonstrates conclusively why they are Israel's top reggae band, proving great roots music today finds some of its finest expressions outside its Jamaican homeland. Touching on many of the major themes of conscious reggae with authentic rhythms and tasty lead vocals, Zvuloon deserves a wide international audience."

Zvuloon Dub System emerges from a multicultural middle-eastern music scene. Adopting their name from one of the twelve tribes of Israel, the band was formed in 2006 by the Smilan brothers.

They shared the same passion for roots reggae and dub, with influences from a variety of music styles, like Ethiopian jazz and rare grooves from the 70’s, American soul, funk and jazz, alongside with Israeli mizrahi (Mediterranean) music.

Similarly to the major producers of reggae, like Lee Perry and King Tubby, the band is also keen on creating not just their own music but their own sound. All their tracks are produced, recorded and mixed in the band's home studio, presenting a unique blend of a rich cultural heritage, which can be heard in the debut album, "Freedom Time". 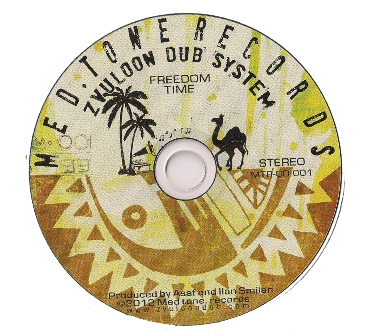 The album released on April 2012 under the band’s independent label, Med.Tone Records.
It consists of 10 previously unreleased original songs written and composed by the band, a groovy reggae version of Voodoo Child by Jimi Hendrix and "Nah Give Up" - collaboration with top Jamaican artist Ranking Joe.

The album reflects the band's vision of contemporary roots reggae and dub.
As of today our album is available in both digital version

and on CD. The vinyl version is expected to be released this summer.


While the album has a laid back and soulful vibe to it, the live performance presents the more energetic side of the band, with a special sound that developed during years of live performance.
The band achieved great success in the reggae scene, but also amongst many music lovers from other genres.

Later this year, the band is planning to release a series of new songs featuring some of the top reggae artists such as Ranking Joe, Milton Blake and more, and an EP with an exciting fusion of reggae and Ethiopian music from the golden age of the 70s.
Following the release of our first album, the band is planning a tour in Europe in the summer of 2012.

Zvuloon Dub System is an 8 piece band with some of the best Israeli underground musicians.

The lead singer, Gili Yalo, who was born in Ethiopia, walked through the desert at the age 4 on an exhausting journey with his family to the promised land - Israel.

Going through dramatic and extreme situations, he sang all the way to his beloved, and from that moment Gili's parents knew he was going to be a singer.

The album available as a digital download / CD by Mail order from: www.zvuloondubsystem.bandcamp.com

This also includes free digital download. And from: www.cdbaby.com/cd/zvuloondubsystem