She has opened for famous acts such as Patti Labelle, Peabo Bryson and Gladys Knight, and toured for three years with Jimmy Cliff. She is the younger sister of singer Tami Chyn. 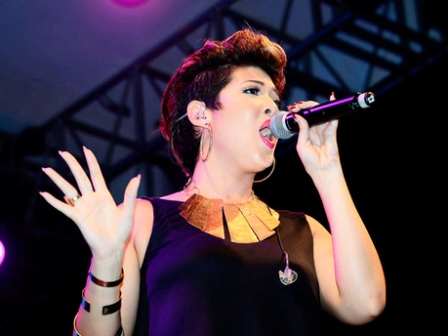 Chin was born in Kingston, Jamaica. Her father, Richard Chin, is of Chinese and Cherokee descent and her mother, Christine Chin, is of English and African descent.

Her parents were in a band called The Carnations[3] and her older sister Tami Chynn is also a singer. Her cousin Jay Hall is a vocalist and guitarist with UK rockers Grassroutes (and previously The Royal Players), and Jay's brother Leon is a vocalist with ska-fusion act Electrik Custard.

Tessanne was introduced to music at a very early age by her parents. Her mother was the trumpeter and singer in The Carnations and her father was the band's drummer. The family has a recording studio in their home in Jamaica.

Tessanne started performing when she was six years old with Cathy Levy's Little People and Teen Players Club, one of Jamaica's top performing arts schools. Most of her vocal coaching came from her mother, as well as noted vocal coach Lecie Wright. Tessanne learned firsthand about cultural diversity when she moved to England at age 12. She coped with the move by devoting a lot of time to writing songs.
Career.

Upon her return to Jamaica, Chin joined the Jamaican rock band Mile High and performed for crowds at many local venues including Jazzfest, Rockfest, and RETV Unplugged. Their style, "rock reggae," was unique and distinct. After going on tour for three years with Jimmy Cliff as a back-up singer, she decided to launch her solo career.

After Tessanne left Mile High, she started writing songs for her debut album. Rudy Valentino and Paul Kastick are her producers. Her debut single, "Hideaway," received heavy rotation on Jamaican radio and select stations in New York. Both the single and its music video were very popular. The song was also featured on VP Records' Reggae Gold 2007. After "Hideaway," she has released two more singles, "Messenger" and "Black Books," both available online on her website.

She has performed at several live shows, including The Air Jamaica Jazz and Blues Festival 2006, Reggae Sumfest 2007 & 2012, the Deck Cafe, The Port Royal Music Festival, ABC Slim Traxx, and her very own show "Arabian Night."

Tessanne has collaborated with fellow Jamaican artists Shaggy ("Never Let Go") and Protoje ("Someone Like You"), the Trinidad and Tobago soca band Kes ("Loving You") and was featured in a track by the legendary Jamaican band Third World, titled "By My Side." She appeared as a special guest of Third World at the Highline Ballroom in New York City in April 2011. "By My Side" was featured in the soundtrack of Robert Townsend's series "Diary of a Single Mom" starring Monica Calhoun, Leon, and Billy Dee Williams.

Other noted tracks by Tessanne are remakes of songs by other famous artists and bands such as Foreigner's "I Wanna Know What Love Is," The Who's "Love, Reign o'er Me," Katy Perry's "Firework," and Phish's "Free." A remake of Bob Marley's "Could You Be Loved," which Tessanne performed with her band Mile High, also circulated through the internet early in 2006. Other works include a live performance of "You and Me" written and performed with her older sister Tami Chynn.

On December 6, 2010, Tessanne released her independent debut album available for digital download entitled In Between Words.

Tessanne Chin has confirmed that she and her husband of four years Michael Cuffe Jr have split. Urban Islandz broke the story last week after sources …

Tessanne Chin's Official Biography Not rated yet
At the White House on a bill with Aretha Franklin; singing duets with Adam Levine and Celine Dion; showcased on a float at the Rose Bowl Parade and headlining …

NEW VIDEO: Tessanne Chin - Fire Not rated yet
Tessanne Chin is bringing the heat in her new video for the new single, “Fire.” The Voice winner of Season 5 is keeping the momentum going with the sultry …

Exclusive Listen to Tessanne Chin Go Old School RnB on New Single Fire Not rated yet
Jamaican singer Tessanne Chin has long had an affinity for retro sounds -- after all, her breakout performance on season five of The Voice (which she eventually …

Tessane and Micheal Celebrates Their 1st Anniversary Not rated yet
Tessanne and Micheal celebrated their 1st anniversary on March 11, 2014. Above is a very beautiful pics of this power couple..

Tessanne Chin performs Donna Summer classic at White House concert Not rated yet
When acclaimed Jamaican singer, Tessanne Chin makes history, she does so in the biggest way possible and Thursday night, she continued that trend by giving …