The album has 19 tracks and it's available online for purchase and downloads. 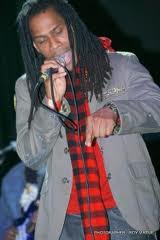 Described as dynamic and sensational, with the versatility and range that defies restriction to any one genre.

Steele is as captivating in his handling of R&B material as he is with soul, reggae, gospel, classical and jazz. Born in Lucea Jamaica, Steele’s inspiration comes from his parents who sang on the church choir, where he too began singing at the tender age of 10.

At age 11 he had developed an affinity for the drums, noting that he was attracted to the physical appeal of this instrument. At 14, Steele entered the Herbert Morrison High School in Montego Bay, and it became clear that a career in music was imminent.

He joined the school’s reggae band Mystic Force, which consisted of some of today’s well-respected musicians, Bengy Myaz, Paul Kastic, and Michael Stevens.

Steele’s first taste of success came with his recording of Stevie Wonder’s “Ribbon in the Sky”, produced by veteran singer and producer Tristan Palmer, but before the songs full potential could be realized, Steele had to migrate to Toronto, Canada.

This however did not stop his continued quest to achieve greatness while living in a reggae market normally ignored by the rest of the world, his persistence has definitely paid off. He has broken the barrier.

Steele is now regarded as the most consistent reggae artist to call Canada home, his music transcends all ages, gender and color. He has made an indelible imprint on the reggae music-loving audiences with appearances at various venues in most major cities in Canada.

He has appeared internationally performing in Africa to an audience in excess of 20,000 and is now starting to create a storm with his live performances in Jamaica. Steele has performed on shows such as Rebel

Salute, regarded as Jamaica's biggest one day cultural reggae event, and has blessed the annual Peter Tosh Birthday Celebration, with his standout showmanship and charisma.

“Silhouette”, cover of the late D. Brown, represents Steele’s break-through song, and he has not slowed down since. Other songs to hit the local charts include “Jah Is My Strength”, which continues to be a source of inspiration to many around the globe and “Greetings”, which represents togetherness.

It is not surprising that Steele is a much sought-after artist for live performances. He has shared the stage with some of reggae’s most respected artists, such as Freddie McGregor, Rita Marley, Tony Rebel, The Melodians, Glenn Washington, Luciano, Beenie Man, Half Pint and Wayne Wonder among others.

Today, Steele has made his mark on the music industry and although most people recognize him as a singer, Steele is also an accomplished musician, songwriter, and producer who has earned a reputation as a perfectionist with his professional approach to his music.

In 2004 Steele released his first full length solo CD/Album “Uncorrupted” and the world stood up to take note of this lyrically conscious brother. To date, Steele has been blessed with the achievements this album has attained.

Tracks from “Uncorrupted” hit many charts globally and in Canada the cd was showered with many accolades which included Canada’s highest musical award, a Juno nomination for Reggae Recording of the Year.

he has since then seen his popularity grown significantly, he accredits this to the blessings from the almighty and the love from his many fans who continue to support his music.

It is now only fitting that three years later Steele is dropping his sophomore cd entitled “The Love of Jah” and the critics are hailing this as his finest work to date.

Just before it’s release, Steele was blessed once again with the achievement of being named “Best Male Vocalist of the Year” and “Best Songwriter of the Year” by the Canadian Reggae Music Achievement Awards.

He stills holds dear to the fact that without the love and support from the people he is nothing, so he continually gives thanks and praises to the creator for all blessings.

He continues to make hit music and current hits such as “What's Wrong Wid Wi”, a duet with crooner George Nooks, his heart felt rendition of “Slave Driver”, the Bob Marley original and his sassy “Confession” are still blazing. The sky is the limit for Steele and he continues to reach for it.