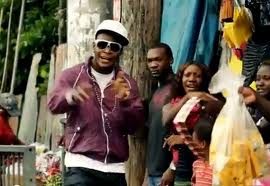 He grew up in the Central Village area in St Catherine with four brothers and one sister.

He attended McAuley Primary and Eltham High School where music became his main focus, and helped to keep him out of trouble.

He first entered the Magnum Kings and Queens of Dancehall competition in 2010 but failed to make the cut, but he never gave up and the second time, he had an impressive run that has made him a household name.

He entered again 2011 this time finishing as a runner-up to eventual winner Hurricane. But this did not stop him as he has hit the ground running, already scoring a bonafide hit with Street Hustle which went to number four on the ER charts in early September.

Street Hustle is a motivational song, inspiring hard work in daunting circumstances. People on the streets who hustle in the hot sun from nine to five sometimes feel unappreciated and unrewarded for their work. A song like this gives them strength. .

Right now the song is popular among the vendors, people selling newspapers, phone cards and anyone making an honest living by selling or working in the streets.

There is also a decent underground buzz around his follow-up single, Juggle, which has been popping up on mixtapes this fall.

He is currently locked in the studio, recording tracks he is confident will be club bangers, 'conscious' tunes and hardcore dancehall songs. He has recorded over 16 songs, enough to put out his debut album.