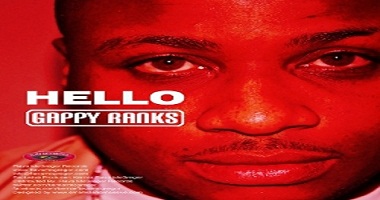 Gappy Ranks’ jazzy, infectious reggae EP was produced by Kemar ‘Flava’ McGregor in connection with his recent campaign to spread the pleasures of pop-reggae music to a global audience.

Within the songs on "Hello," the listener can hear Ranks' personal and creative evolution within the UK’s vibrant reggae scene, which is a colorful, celebratory community where live stage shows are the preferred source of entertainment, and local airwaves are brimming with reggae music on pirate radio broadcasts, combining to create Caribbean Britain's de facto mainstream media.

“Because of the major diversity of ethnic origin in UK, cultures have had no choice but to interact,” said Gappy Ranks. “We also have the highest population of Jamaicans abroad so this has given reggae music a home away from home, so reggae/dancehall music is played in every club within every city. The radio stations also play a big part in the direction of music in the UK as commercial & pirate stations dominate the airwaves. We also have the Notting Hill Carnival every summer, where people from all around the world attend, bringing eye to the talent in the UK.”

Gappy Ranks, fortunate enough to be British, is free to sing about humanistic love and urban romance. With the songs on “Hello,” Gappy Ranks celebrates the opportunity to feel real emotions, making romance and spiritual development into nightclub-worthy party anthems.

“I captured the wondering mind of a man’s love for a woman & his approach to her,” said Gappy Ranks. "The song ’Maybe’ was different, because a major part of my life was drawn into scripture as I questioned my power to love. I have found myself once again speaking out aloud & relieving thoughts that might hinder my qualities in life. For me that is the "Hello Ep.”

Gappy Ranks’ was born Jacob Lee Williams in the Harlesden section of London, UK. In 2010, he released his first album “Put The Stereo On,” from which the single "Heaven In Her Eyes" was ranked number one in the UK for 16 weeks. Gappy ranks was nominated for the 2010 MOBO Award in the "Best Reggae Act Category.