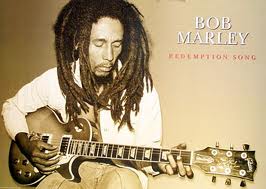 The song urges listeners to "Emancipate yourself from mental slavery," because "None but ourselves can free our minds". These lines were taken from a speech given by Marcus Garvey in Nova Scotia during October 1937

It is the final song on the album which also has popular tracks such as:Coming in from the Cold, Real Situation, Bad Card
We and Dem, Work, Zion Train, Pimper's Paradise, Could You Be Loved, Forever Loving Jah, Redemption Song (Band Version) and
Could You Be Loved (12" Version).

he song is considered one of Marley's seminal works, with lyrics derived from a speech given by the Pan-Africanist orator Marcus Garvey. It is strictly a solo acoustic recording, consisting of Marley singing and playing an acoustic guitar.

Because of the message in the song, In 2004, Rolling Stone placed the song at #66 among The 500 Greatest Songs of All Time. In 2010, the New Statesman listed it as one of the Top 20 Political Songs.

Old pirates, yes, they rob I;
Sold I to the merchant ships,
Minutes after they took I
From the bottomless pit.
But my hand was made strong
By the hand of the Almighty.
We forward in this generation
Triumphantly.
Won't you help to sing
These songs of freedom?
'Cause all I ever have:
Redemption songs,
Redemption songs.

Emancipate yourselves from mental slavery;
None but ourselves can free our minds.
Have no fear for atomic energy,
'Cause none of them can stop the time.
How long shall they kill our prophets,
While we stand aside and look? Ooh!
Some say it's just a part of it:
We've got to fulfill the Book.